In its opinion  in Nwanguma v. Trump, a panel of the Sixth Circuit ruled that the complaint against Donald Trump and his campaign for damages based on "inciting to riot" during a Kentucky event should be dismissed. Recall that the district judge denied Trump's motion to dismiss the complaint's count of incitement to riot based on events during a campaign event in Louisville, Kentucky on March 1, 2016. The complaint alleged that the candidate told the crowd “Get ’em out of here,” when the plaintiffs were "peacefully protesting" at a campaign rally, and as  a result of the candidate's encouragement, three individual defendants pushed, shoved, and struck the three plaintiffs.

The Sixth Circuit's opinion, authored by Judge David McKeague, agreed with the district judge that the relevant precedents were Brandenberg v. Ohio (1969),  Hess v. Indiana (1973), and the Sixth Circuit's  en banc decision in Bible Believers v. Wayne County (2015).  However, the Sixth Circuit criticized the district judge's analysis on some of the elements of the Kentucky incitement to riot statute as "decidedly thin."  For Judge McKeague, seemingly the most important fact of the Trump speech was that Trump's repeated statement “Get ’em out of here" was followed by "don't hurt 'em." Thus, "any implication of incitement to riotous violence is explicitly negated": "If words have meaning, the admonition 'don't hurt 'em' cannot reasonably be construed as an urging to "hurt 'em.'" 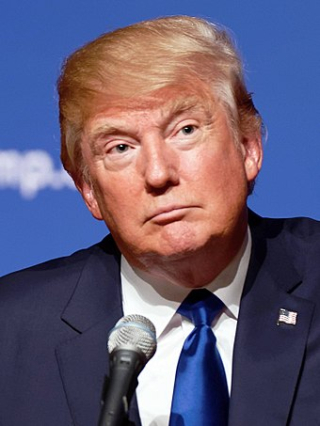 After considering the elements of the Kentucky incitement to riot statute, Judge McKeague then considers the First Amendment protection that inheres in the definition of incitement to riot. Yet on both issues, Trump's "don't hurt 'em" statement figures prominently.  Again, while in "the ears of some supporters, Trump's words may have had a tendency to elicit a physical response" they are undercut by the words "don't hurt 'em."

Judge Helene White's short concurring opinion argues that the "majority opinion elides salient details of Trump's speech that make this a closer case" for her than for the majority opinion which "overemphasizes the legal significance of the 'don't hurt 'em' statement." However, Judge White concurs because she concludes that the allegations do not meet the Kentucky statute's definition, and therefore the court should not have reached the First Amendment issue.