In its divided opinion in Brakebill v. Jaeger, an Eighth Circuit panel has stayed a district judge's  injunction against enforcement of a North Dakota statute requiring a valid form of identification that includes the prospective voter's current residential street address in North Dakota.  The district court had found that this provision violated the Equal Protection Clause and ordered that the state accept either a "current residential street address or a current mailing address (P.O. Box or other address) in North Dakota.”  (The district court had also found that other tribal identification rules violated equal protection, but the state did not appeal those portions of the injunction.)

The majority of the Eighth Circuit reasoned that this residential street address requirement was neutral and as applied to the six named plaintiffs, did not impose an excessive burden. In its brief opinion, the majority concluded that North Dakota was not only likely to succeed on the merits, but would also be irreparably harmed without a stay, in large part because North Dakota does not have a voter registration requirement. " 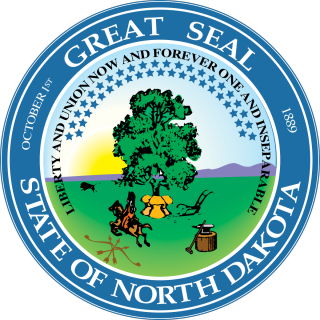 If the Secretary must accept forms of identification that list only a mailing address, such as a post office box, then voters could cast a ballot in the wrong precinct and dilute the votes of those who reside in the precinct. Enough wrong-precinct voters could even affect the outcome of a local election. The dissent’s suggestion that the State protect itself from this harm by using maps or affidavits would require North Dakota to reinstate self-certification methods that the legislature already deemed insufficiently reliable when it adopted the residential street address requirement. The inability to require proof of a residential street address in North Dakota also opens the possibility of fraud by voters who have obtained a North Dakota form of identification but reside in another State while maintaining a mailing address in North Dakota to vote. The dissent deems this impossible, because only a resident of the State is supposed to receive a form of identification, but the injunction prevents election officials from verifying that a voter with such an identification has a current residential street address in the State. Even if the State can prosecute fraudulent voters after the fact, it would be irreparably harmed by allowing them to vote in the election.

Dissenting, Judge Jane Kelly argued that it was important that identification cards required a fee, and though state law required the Department of Transportation to provide free non-driver identification cards, the state did not do so in practice (and its website actually stated that a fee was necessary). Instead of an injury to North Dakota, Judge Kelly contended that the injury would be to prospective voters, like the six Native American plaintiffs, who would be potentially denied the right to vote.