Daily Read: Report on the Civil Rights Record of Kavanaugh by NAACP LDF

In its Report entitled The Civil Rights Record of Judge Brett Kavanaugh, the Legal Defense and Education Fund, Inc. of the NAACP supports its opposition to the confirmation of Judge Kavanaugh to the United States Supreme Court.

even before considering the opinions he has authored, the speeches he has given, and his full legal record, the following is true: Judge Kavanaugh’s  nomination is tainted by the influence of reactionary groups in his selection by the  President and by the President’s assertion that his nominees will target and overturn  settled Supreme Court precedent. A woefully inadequate document production is  thwarting the Senate’s “advice and consent” function and the ability of the American  public to determine whether they want their Senators to support this nominee. And  perhaps most significantly, the President’s credibility has been sapped by the ongoing  investigations that raise questions about the legitimacy of his occupancy of the Oval  Office and the vast powers it confers, such as the nomination of Supreme Court  Justices.  This highly unusual and critical context powerfully bears on our assessment of Judge Kavanaugh’s nomination.

Yet the report does delve deeply into Kavanaugh's decisions and reaches conclusions. For example, after a discussion of his decisions about campaign finance, the Report states:

Judge Kavanaugh’s campaign finance record provides four overarching themes. First, Judge Kavanaugh appears hostile to campaign finance regulations, seeming to be unwilling to uphold regulations beyond a narrow anti-corruption rationale. Second, Judge Kavanaugh’s BCRA interpretation [in Bluman v. Federal Election Committee] about the scope of issue-advocacy expenditures would allow foreign actors to engage in thinly veiled “issue advocacy” that deepens racial and religious division leading up to elections. Such a narrow interpretation of the BCRA prevents it from barring foreign actors who influence U.S. elections in concrete ways and increases the likelihood of the use of these racial appeals during the next federal election, an important tool of suppressing the votes of communities of color. Third, as evident in Emily’s List [v. Federal Election Commission], Judge Kavanaugh appears willing to reach out unnecessarily to decide issues in this context. Fourth, Judge Kavanaugh would likely revisit the soft-money limits on contributions to political parties as justice.

At several points, the Report suggests questions and specific focus for the Senate questioning. The hearings begin today. 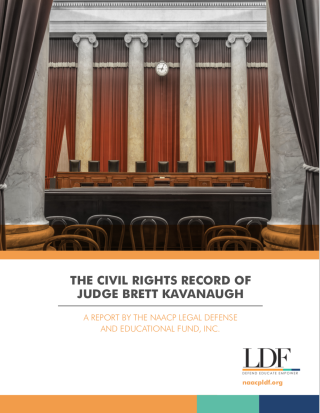