It is the 98th anniversary of the right to vote for United States women. Tennessee became the necessary 36th state to ratify the Nineteenth Amendment on August 18, 1920.

Congress shall have power to enforce this article by appropriate legislation.

The Amendment was made necessary by the Court's 1874 decision in Minor v. Happersett concluding that the Fourteenth Amendment did not extend citizenship rights to women.

The Amendment was first introduced in Congress in 1878, but the amendment eventually ratified by the required three-fourths of the states was introduced in 1919, with quick ratification by Illinois, Michigan, Kansas, New York and Ohio. 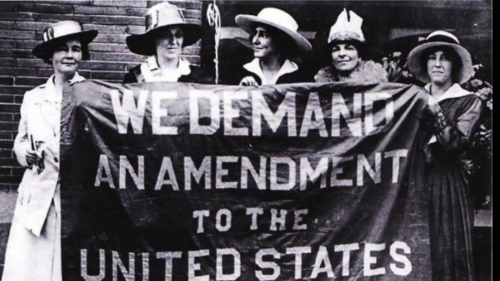 As we wrote in 2010, while the Nineteenth Amendment has not engendered much constitutional jurisprudence, ConLawProf Reva Siegel has argued that the Amendment could be the basis for Congressional power to address sex discrimination. Her 2002 article, She the People: The Nineteenth Amendment, Sex Equality, Federalism, and the Family, available on ssrn, argues:

The debates over woman suffrage that began with the drafting of the Fourteenth Amendment and concluded with the ratification of the Nineteenth Amendment are plainly relevant to understanding how the guarantee of equal citizenship applies to women. At the founding and for generations thereafter, Americans believed women did not need the vote because they were represented in the state through male heads of household. By adopting the Nineteenth Amendment, Americans were breaking with traditional conceptions of the family that were rooted in coverture, as well as with understandings of federalism that placed family relations beyond the reach of the national government. The debates over the Nineteenth Amendment thus memorialize the nation's decision to repudiate traditional conceptions of the family that have shaped women's status in public as well as private law and that are inconsistent with equal citizenship in a democratic polity. If concepts of sex discrimination were informed by the experience and deliberative choices of past generations of Americans, equal protection doctrine would better recognize forms of discrimination historically directed at women; and the law of federalism would take a more critical approach to claims that the family is a local institution, beyond the reach of the national government.

We asked then whether a robust Nineteenth Amendment jurisprudence might yet be developed; not yet.