In his opinion in Gary B. v. Snyder, United States District Judge for the Eastern District of Michigan Stephen Murphy dismissed a complaint alleging constitutional violations in the public schools in Detroit.

After finding the plaintiff students had standing and that the complaint against Governor Snyder and other officials was not barred by Eleventh Amendment immunity, Judge Snyder dismissed the Due Process Clause and Equal Protection Clause claims.

On the Due Process Clause claim, Judge Murphy noted that the constitutional right at issue is framed as "access to literacy" which "speaks to an opportunity" rather than simply literacy which is an "outcome of education." Using this definition, Judge Murphy distinguished the complaint from landmark cases such as San Antonio Independent School District v. Rodriguez (1973), rejecting "education" as a fundamental right. Nevertheless, applying the "standard" test to determine a fundamental right from Washington v. Glucksberg (1997) — "fundamental rights are only those 'objectively, deeply rooted in this Nation's history and tradition, and implicit in the concept of ordered liberty, such that neither liberty nor justice would exist if they were sacrificed'"— even through the lens of Obergefell v. Hodges (2015), the judge reasoned that fundamental rights are generally only "negative rights."

Conceivably, a case like this one could be argued on either positive- or negative- right theories. As a positive right, access to literacy (i.e., a minimally adequate education) is so important that the state is compelled to provide it. As a negative right, access to literacy is so important that the state may not hinder Plaintiffs' attempts to secure it.  ***

But a violation of negative rights is not what the Complaint truly seems to argue. The Complaint explains, in great detail, that the instruction and resources in Plaintiffs' schools are inadequate. 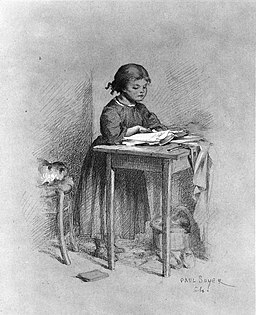 Judge Murphy reasoned that the Supreme Court's understanding of a "fundamental right," requires finding that neither liberty nor justice would exist absent state-provided literacy access, which would be "difficult to square with the fact that '[t]here was no federal or state-run school system anywhere in the United States as late as 1830.'" Thus, for the judge, the "ordered liberty" prong is tantamount to historical roots:

School districts at the time of the Constitution's ratification were formed 'when a group of farms came together and decided to construct a public building for schooling, where their children could gather and be taught reading, writing, and moral codes of instruction.' [citation omitted]  The history evinces a deep American commitment to education, but runs counter to the notion that ordered society demands that a state provide one.

The conditions and outcomes of Plaintiffs' schools, as alleged, are nothing short of devastating. When a child who could be taught to read goes untaught, the child suffers a lasting injury—and so does society. But the Court is faced with a discrete question: does the Due Process Clause demand that a State affirmatively provide each child with a defined, minimum level of education by which the child can attain literacy? Based on the foregoing analysis, the answer to the question is no.

Judge Murphy concluded that the Equal Protection Clause claim was similarly not founded. The court repeats that there is no fundamental right and further finds that there is no racial classification because there to be a "relevant comparator school" requires not only that the school in question have a different racial composition that the 97% African-American schools in Detroit but also that the school "experienced relevant state interventions" like the schools in Detroit. Thus, rational basis scrutiny applies at its most deferential — whether "there is any reasonably conceivable state of facts that could provide a rational basis for the classification" — and the plaintiffs did not plead "specific decisions Defendants made concerning Plaintiffs' schools that could have been made differently" and were thus irrational.

The dismissal of the complaint makes it ripe for appeal.