Second Circuit: Police Use of LRAD May Violate Fourteenth Amendment

In its unanimous opinion in Edrei v. Maguire (Bratton), a panel of the Second Circuit upheld the the denial of a motion to dismiss a complaint alleging excessive force under the Fourteenth Amendment's Due Process Clause by police officers using a LRAD - - - long-range acoustic device - - - during a protest. The defendants claimed both that the LRAD did not constitute excessive force and that they were entitled to qualified immunity because it had not been clearly established at the time of the 2014 protest that using a LRAD could be excessive force.

The 100X’s product sheet boasts that it has a maximum volume of 136 decibels at one meter and the manufacturer guidelines caution not to use it within 10 to 20 meters of people. A diagram on the 100X’s control panel shows a red beam emanating from the front of the device and instructs: “DO NOT ENTER WITHIN 10 METERS DURING CONTINUOUS OPERATION.”

The plaintiffs, who were subjected to the LRAD during a protest in New York after "a Staten Island grand jury declined to indict the NYPD officer who placed Eric Garner, an unarmed black man, in a fatal chokehold." During the protest,

with no warning, NYPD officers discharged pepper spray. Several plaintiffs who had been watching the arrests began to flee. Seconds later the wail of a high‐pitched alarm began pulsing though the streets. The defendants had activated the LRAD’s area denial function. According to plaintiffs, they had not been ordered to disperse and no such order is audible on the video. 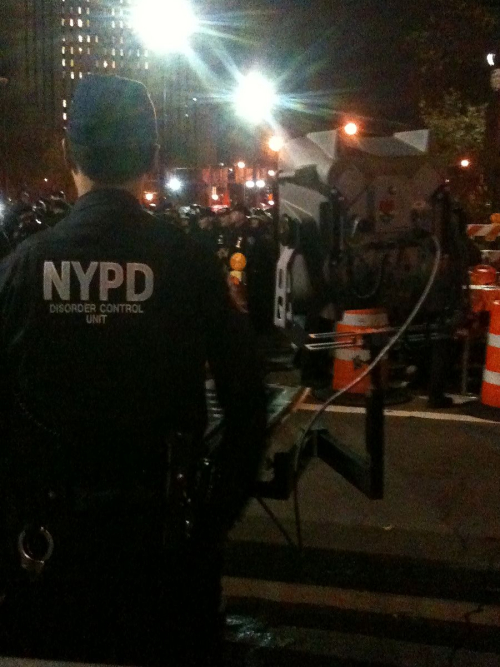 The plaintiffs reported physical injuries, including significant ear pain, prolonged migraines, vertigo, and ringing in the ears, and most sought medical treatment.

Judge Katzmann's opinion rejected the defendants' argument that the LRAD could not constitute "excessive force."  The opinion relied on the "shocks the conscience" test as it had been explained in the Second Circuit with regard to excessive force as considering several factors: “the need for the application of force, the relationship between the need and the amount of force that was used, the extent of the injury inflicted, and whether the force was . . . [inflicted] maliciously or sadistically.”  The court held that this Second Circuit precedent was not changed by Kingsley v. Hendrickson, 135 S. Ct. 2466 (2015), decided after the 2014 protest. Moreover, applying the standard to the allegations, the security threat was low, the proportionality of the force used was "stark," there were significant injuries, and there are no allegations that the police officers attempted to temper their use of force.

The court also rejected the police officers' claim to qualified immunity. The defendants argued that it was not clearly established at the time of the 2014 protest that "using force in crowd control violates due process."

But that is like saying police officers who run over people crossing the street illegally can claim immunity simply because we have never addressed a Fourteenth Amendment claim involving jaywalkers. This would convert the fair notice requirement into a presumption against the existence of basic constitutional rights. Qualified immunity doctrine is not so stingy.

Additionally, the court discussed the protestors First Amendment rights and stated that "Were this not enough, a wealth of cases inform government officials that protesters enjoy robust constitutional protections."

The court did stress that the opinion was a "narrow" one.  As an interlocutory appeal from the denial of a motion to dismiss, this is expected. Nevertheless, the opinion is certainly a victory for the plaintiffs in their due process challenge to the use of LRAD.