In its opinion in Gill v. Whitford involving a challenge to Wisconsin's alleged partisan gerrymandering the Court, in an opinion by Chief Justice Roberts, with a concurring opinion by Justice Kagan (joined by Justices Ginsburg, Breyer, and Sotomayor), found that the plaintiffs did not prove sufficient Article III standing to sustain the relief granted in the divided decision by the three judge court.  Additionally, in a per curiam opinion in Benisek v. Lamone, involving a challenge to alleged political gerrymandering in Maryland, the Court declined to disturb the three judge court's decision not to grant to a preliminary injunction.

Chief Justice Roberts' opinion for the Court in Gill admits that

Over the past five decades this Court has been repeat­edly asked to decide what judicially enforceable limits, if any, the Constitution sets on the gerrymandering of voters along partisan lines. Our previous attempts at an answer have left few clear landmarks for addressing the question.

The  Chief Justice's Gill opinion does little, if anything, to remedy this lack of "landmarks" in the doctrine. However, the Chief Justice's opinion continues that the Court's "efforts to sort through those considerations have generated conflict­ing views both of how to conceive of the injury arising from partisan gerrymandering and of the appropriate role for the Federal Judiciary in remedying that injury" and it is this set of "conflicting views" that the Chief Justice's opinion sets out to resolve. The 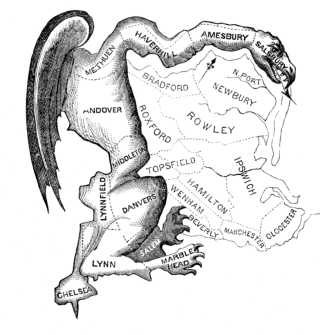 resolution seems simple: to the extent that plaintiffs' "alleged harm is the dilution of their votes" in violation of the Equal Protection Clause, "that injury is district specific." In sum, the injury must be an individual one that arises from an individual's vote being diluted by the voter's placement in a "cracked" or "packed" district.  The Chief Justice's opinion concludes that while the individual plaintiffs had "pleaded a particularized burden along such lines," they failed to prove those facts at trial.

Yet this simplicity is less straightforward when combined with Justice Kagan's concurring opinion, which correctly notes that in addition to the Equal Protection Clause claim of vote dilution, "at some points in this litigation, the plaintiffs complained of a different injury — an infringement of their First Amendment right of association." [Indeed, the opinion for the three judge court seems to combine the equal protection and First Amendment claims.] On the First Amendment claim, Kagan writes:

when the harm alleged is not district specific, the proof needed for standing should not be district specific either. And the associational injury flowing from a statewide partisan gerrymander, whether alleged by a party member or the party itself, has nothing to do with the packing or cracking of any single district’s lines. The complaint in such a case is instead that the gerrymander has burdened the ability of like-minded people across the State to affiliate in a political party and carry out that organization’s activities and objects. Because a plaintiff can have that complaint without living in a packed or cracked district, she need not show what the Court demands today for a vote dilution claim. Or said otherwise: Because on this alternative theory, the valued association and the injury to it are statewide, so too is the relevant standing requirement.

Moreover, even on the equal protection vote dilution claim, Kagan's opinion instructs that the Court's determination of remand rather than dismissal means that

the plaintiffs—both the four who initially made those assertions and any others (current or newly joined)—now can introduce evidence that their individual districts were packed or cracked. And if the plaintiffs’ more general charges have a basis in fact, that evidence may well be at hand. Recall that the plaintiffs here al­leged—and the District Court found —that a unified Republican government set out to ensure that Republicans would control as many State Assembly seats as possible over a decade (five consecutive election cycles). To that end, the gov­ernment allegedly packed and cracked Democrats throughout the State, not just in a particular district (see, e.g., Benisek v. Lamone) or region. Assuming that is true, the plaintiffs should have a mass of packing and cracking proof, which they can now also present in district-by-district form to support their standing. In other words, a plaintiff residing in each affected district can show, through an alternative map or other evidence, that packing or cracking indeed occurred there.

[emphasis added].  The Court remanded and declined to "direct dismissal" given that this "is not the usual case" because the it "concerns an unsettled kind of claim," the "contours and justiciability of which are unresolved." Justice Thomas, joined by Justice Gorsuch, wrote separately to disagree with the remand, arguing there is "nothing unusual" about the case and that the matter should be dismissed.

In sum, the decisions in Gill and Benisek leave the constitutionality of partisan gerrymandering as unsettled as before.

[image: "the gerrymander" via]