While these questions could be asked across many doctrines, one intersection occurs in the origins of privacy, including the tort remedies for its invasion. In his article Privacy's Double Standards, available on ssrn and forthcoming in Washington Law Review, Professor Scott Skinner-Thompson argues for the necessity of equal protection standards in privacy protection torts. Centered on the tort of public disclosure of private facts, Skinner-Thompson rightly observes that it has been applied unevenly, with privileged and celebrity plaintiffs prevailing (think: Hulk Hogan v. Gawker) when more marginalized plaintiffs (such as victims of revenge porn) have not, noting that this is perhaps not surprising given the origins of the tort in "Brahman society." Skinner-Thompson discusses these cases and numerous others to support this observation (and provides a nice appendix of his research methodology). 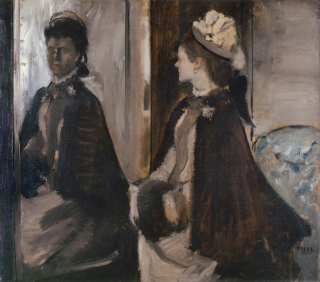 Yet rather than simply detail the disparities evinced in the cases, Skinner-Thomson argues that just as the First Amendment has shaped the doctrines of torts, so too should constitutional equality principles be applied to the inequalities in tort remedies for invasions of privacy. He argues that "to better comply with constitutional equality principles, the substance of privacy tort law must be relaxed so as to ensure that individuals in marginalized communities are able to bring claims on the same terms as privileged individuals."

His specific recommendations for reshaping the tort doctrine of public disclosure of private facts:

As Skinner-Thompson makes clear, he is not arguing that a privacy tort plaintiff  " will be able to successfully bring an equal protection challenge to the way the public disclosure tort is operating," but it is to argue that this tort could be  - - - and should be - - - inflected with equal protection concerns.

[image: Edgar Degas, Mrs Jeantaud in the Mirror, circa 1875 via]