In her opinion in Zervos v. Trump, New York County Supreme Court Justice Jennifer Schecter ruled that the lawsuit for defamation by Summer Zervos against now-President Trump could proceed, denying a motion to dismiss or to stay by Trump based on his presidential status.

Recall that Summer Zervos filed the law suit a few days before Trump was inaugurated. Recall also that one of the major issues was whether or not a sitting president was amenable to suit in state court: In other words, did the rule in the United States Supreme Court's unanimous 1997 decision of Clinton v. Jones holding that then-President Clinton was subject to suit in federal court extend to state court?

Justice Schecter's first paragraph answers the question without hesitation, beginning with a citation to Clinton v. Jones and stating that the case left open the question of whether "concerns of federalism and comity compel a different conclusion for suits brought in state court," but adding "they do not." Her analysis is relatively succinct, beginning with a simple statement: "No one is above the law" and concluding that "In the end, there is absolutely no authority for dismissing or staying a civil action related purely to unofficial conduct because defendant is the President of the United States."

Justice Schecter also denied the motion to dismiss for failure to state a claim and thus discussed the defamation claim which obliquely raises First Amendment issues. (The first 8 pages of the 19 page opinion detail the allegations of the complaint.) The motion to dismiss had essentially argued that Mr. Trump's statements were mere hyperbole. Justice Schecter disagreed:

Defendant--the only person other than plaintiff who knows what happened between the two of them--repeatedly accused plaintiff of dishonesty not just in his opinion but as a matter of fact. He not only averred that plaintiff told "phony stories" and issued statements that were "totally false" and "fiction," he insisted that the events "never happened" and that the allegations were "100% false [and] made up.”

A reader or listener, cognizant that defendant knows exactly what transpired, could reasonably believe what defendant's statements convey: that plaintiff is contemptible because she "fabricated" events for personal gain. . . . . Defendant used "specific, easily understood language to communicate" that plaintiff lied to further her interests . . .  His statements can be proven true or false, as they pertain to whether plaintiff made up allegations to pursue her own agenda.  Most importantly, in their context, defendant's repeated statements--which were not made through op-ed pieces or letters to the editor but rather were delivered in speeches, debates and through Twitter, a preferred means of communication often used by defendant- -cannot be characterized simply as opinion, heated rhetoric, or hyperbole. That defendant's statements about plaintiff's veracity were made while he was campaigning to become President of the United States, does not make them any less actionable. . . .

Thus, it seems that the lawsuit against the President, now joined by a declaratory judgment suit by Stormy Daniels which we discussed here and since removed to federal, will proceed apace. Assuming, of course, that the President's lawyers do not attempt an interlocutory appeal. 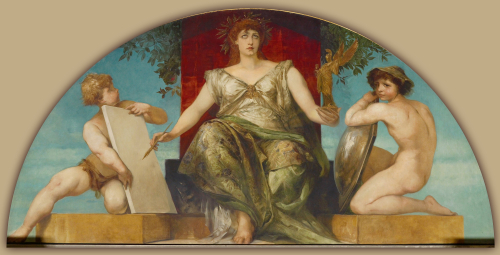 image: Hans Makart, Allegory of the Law and Truth of Representation, circa 1881 via