In its opinion in New York State Rifle & Pistol Ass'n v. City of New York, a unanimous panel of the Second Circuit, affirming the district judge, rejected a constitutional challenge to a New York City regulation regarding "premises license" for a handgun. Under 38 RCNY § 5-23, a person having a premises license “may transport her/his handgun(s) directly to and from an authorized small arms range/shooting club, unloaded, in a locked container, the ammunition to be carried separately.” The definition of "authorized" range/shooting club, however, includes a limit to facilities located in New York City and is the essence of the plaintiffs' challenge.  The New York State Rifle & Pistol Ass'n, as well as three individual plaintiffs, argued that this limitation is unconstitutional pursuant to the Second Amendment, the dormant commerce clause, the right to travel, and the First Amendment. Their specific arguments centered on the two instances: that one plaintiff was prohibited from taking his handgun to his second home in Hancock, New York; and that all plaintiffs wanted to take their handguns to firing ranges and competitions outside of New York City. 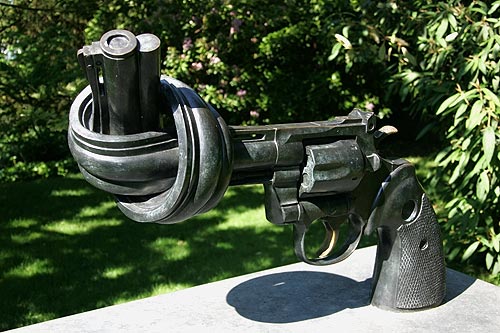 On the Second Amendment challenge, the opinion for the panel by Judge Gerald Lynch tracked the analytic structure articulated by the Second Circuit in New York State Rifle & Pistol Ass'n v. Cuomo, decided in 2015. Assuming that the Second Amendment applied, the court concluded that intermediate scrutiny was the appropriate standard based on its analysis of two factors: "(1) ‘how close the law comes to the core of the Second Amendment right’ and (2) ‘the severity of the law’s burden on the right.' "  The court found that the prohibition of a plaintiff from taking the handgun to his second home was not a substantial burden: he could have a handgun at his second home if he applied to that county and noted that the plaintiff did not even estimate the money or time it would cost to obtain a second premises license and handgun. Likewise, the court found that limiting their training opportunities to New York City - - - given that there are at least 7 training facilities in New York and one in each borough - - - was not a substantial burden. Moreover, "nothing in the Rule precludes the Plaintiffs from utilizing gun ranges or attending competitions outside New York City, since guns can be rented or borrowed at most such venues for practice purposes."

In applying intermediate scrutiny, the court found that public safety was an important interest served by the regulation. The court referred to a detailed affidavit by the Commander of the License Division who

explained that premises license holders “are just as susceptible as anyone else to stressful situations,” including driving situations that can lead to road rage, “crowd situations, demonstrations, family disputes,” and other situations “where it would be better to not have the presence of a firearm.” Accordingly, he stated, the City has a legitimate need to control the presence of firearms in public, especially those held by individuals who have only a premises license, and not a carry license.

Additionally, the city had an interest in enforcing the premises license - - - which again is distinct from a carry license - - - and under a prior rule allowing transport to ranges outside the city the Commander's affidavit concluded this had made it “too easy for them to possess a licensed firearm while traveling in public, and then if discovered create an explanation about traveling for target practice or shooting competition.”

After finding the regulations survived the Second Amendment, the court's treatment of the dormant commerce clause, right to travel, and First Amendment issues was more succinct. For both the dormant commerce clause and right to travel arguments, one of the most obvious problems in the plaintiffs' arguments was their failure to convincingly allege issues regarding crossing state lines. Under the commerce clause analysis, there was no showing that the city or state was engaging in protectionist measures and, as in the Second Amendment analysis, the plaintiffs were "free to patronize firing ranges outside of New York City, and outside of New York State; they simply cannot do so with their premises-licensed firearm." Similarly, the plaintiffs could travel, they simply could not bring their handgun licensed for a specific premises with them.

On the First Amendment, the court rejected the argument that being "forced" to join a gun club in New York City or not being allowed to join a gun club outside of the city qualified as expressive association. But even if it did, the rule does not mandate or forbid joining a specific club, again, the New York City rule "only their ability to carry the handgun that is licensed for a specific premises outside of those premises."

Thus, the Second Circuit rejected constitutional challenges that essentially sought to broaden a premises-only license into a carry-license for handguns.