The Court heard oral argument in Minnesota Voters Alliance v. Mansky, a First Amendment challenge to Minn. Stat. §211B.11, entitled "Soliciting near polling places," and includes among its petty misdemeanor violations a prohibition of political attire: "A political badge, political button, or other political insignia may not be worn at or about the polling place on primary or election day."  The argument tracked many of the issues in our preview here.

Important to the argument was the relevance of Burson v. Freeman (1992), in which the Court upheld a Tennessee statute which prohibited the solicitation of votes and the display or distribution of campaign materials within 100 feet of the entrance to a polling place. Early in the argument, Justice Sotomayor asked J. David Breemer, counsel for the petitioners, whether he was asking the Court to overrule Burson. Breemer distinguished Burson as "active campaigning" speech while the Minnesota statute governing attire and buttons was directed at "passive speech," but this did not seem satisfactory to the Justices. 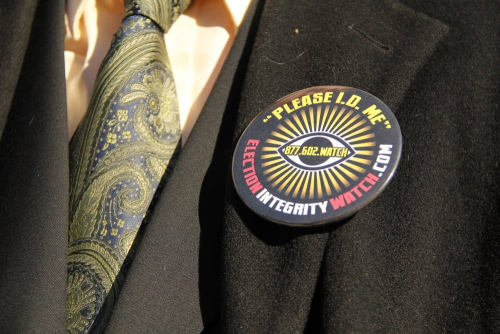 The slippery slope inherent in overbreadth challenges was traversed multiple times. How could the lines be drawn? Several Justices at different points pressed counsel for Minnesota Voters Alliance on whether the statute would be constitutional if narrowed to "electoral speech" (vote for candidate X), but while counsel eventually agreed this might be constitutional, Justice Sotomayor then asked about ballot measure issues. During Daniel Rogan's argument on behalf of the State of Minnesota, Justice Alito pressed with any number of examples after stating that political connotations are in the "eye of the beholder": rainbow flags, Parkland Strong, the text of the Second Amendment, the text of the First Amendment, and "I miss Bill." And what about the very notion of entitlement to vote itself? In Breemer's rebuttal, Justice Sotomayor returned to some of the facts that had prompted the First Amendment challenge:

Let's not forget who these people were and what they were wearing, "Please ID me," which for some people was a highly charged political message, which was found, on remand, was intended to intimidate people to leave the polling booth . . . .

For Alito, the focus was not on voters who may be intimidated but on the humiliation of a voter who might be forced to cover up a political shirt with "a bathrobe."

As for the government interests supporting the statute, the question of dignity and decorum were paramount, inviting the comparison to the courtroom, which Justice Kagan raised. Although Breemer stated there was no constitutional right to vote free from being bothered, C.J. Roberts asked why a state could not make a determination that there should be such a policy.

The on-the-ground enforcement of the statute, with a potential for viewpoint discrimination, was a focus of Justice Alito's questions, but other Justices were also interested in what actually happened at the polling place. For Alito,but Rogan stressed the process and repeatedly noted that for one hundred years the statute has not been a problem and that Minnesotans know not to wear political slogans to go vote. If there are issues, Rogan stated, they are rather expeditiously solved in a bipartisan process at the polling place.

While one can assume their positions from their questions in oral argument from a few Justices - - - Alito seemed rather obvious - - - it is always risky to venture a guess about the outcome, especially when there is a conflict of constitutional interests. Indeed, this case may be most like Williams-Yulee v. The Florida Bar in which a closely-divided Court in 2015 upheld an ethics rule prohibiting judicial candidates from solicitation; Chief Justice Roberts wrote the majority opinion.