In a 55 page opinion in the consolidated cases of Vidal v. Nielsen and New York v. Trump, United States District Judge Nicholas Garaufis granted a preliminary injunction against the rescission of DACA, the Deferred Action for Childhood Arrivals program, covering 800,000 people in the United States who are not citizens but who have been residents since childhood.

Recall that New York, joined by 15 other states and D.C. filed a complaint last September alleging the DACA rescission violated the constitution as well as being unlawful under the Administrative Procedure Act (APA). Judge Garaufis's Order is based on a violation of the APA finding the rescission arbitrary and capricious based in part on the Attorney General Jefferson Sessions's memo finding the DACA program unconstitutional.

After an extended analysis of Sessions's Letter, Judge Garaufis writes

To the extent the decision to end the DAGA program was based on the Attorney General's determination that the program is unconstitutional, that determination was legally erroneous, and the decision was therefore arbitrary and capricious. The court does not address whether the DACA program might be unconstitutional on grounds other than those identified by the Attorney General, as any such grounds are not fairly before the court.

Judge Garaufis also made clear the limited scope of the preliminary injunction: 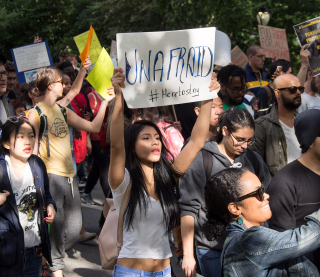 This order does not hold that the rescission of DACA was unlawful. That question is for summary judgment, not motions for a preliminary injunction. Cf. Hamilton Watch Co. v. Benrus Watch Co., 206 F.2d 738, 742 (2d Cir. 1953) (“[A] preliminaiy injunction . . . is, by its very nature, interlocutory, tentative, provisional, ad interim, impermanent, mutable, not ﬁxed or ﬁnal or conclusive, characterized by its for-the-time-beingness.”).

This order does not hold that Defendants may not rescind the DACA program. Even if the court ultimately ﬁnds that Defendants’ stated rationale for ending the DACA program was legally deﬁcient, the ordinary remedy is for the court to remand the decision to DHS for reconsideration. On remand, DHS “might later, in the exercise of its lawful discretion, reach the same result for a different reason.

This order does not require Defendants to grant any particular DACA applications or renewal requests. Restoring the DACA program to the status quo as of September 4, 2017, does not mean that every DACA recipient who requests renewal of his or her deferred action and work authorization will receive it. The DACA program identiﬁed “criteria [that] should be satisﬁed before an individual is considered for an exercise of prosecutorial discretion.” (2012 DACA Memo at 1.) It did not require immigration ofﬁcials to defer action against any individuals who met these criteria; to the contrary, the 2012 DACA Memo stated that DHS would exercise prosecutorial discretion “on an individual basis” and would not “provide any assurance that relief will be granted in all cases.” Preserving the status quo means only that Defendants must continue considering DACA applications and renewal requests, not that they must grant all such applications and requests. This order does not prevent Defendants’ from revoking individual DACA recipients’ deferred action or work authorization. Under the 2012 DACA Memo, DHS may terminate a DACA recipient’s deferred action “at any time, with or without a Notice of Intent to Terminate, at [its] discretion.” Maintaining the status quo does nothing to alter that.

Recall that Judge Alsup of the Northern District of California issued a preliminary injunction in January which the government is appealing.