In a brief and impassioned Opinion and Order  in Ragbir v. Sessions, United States District Judge Katherine Forrest of the Southern District of New York ordered the immediate release of immigrant rights activist Ravidatha ("Ravi") Ragbir, whose case has attracted much attention.

Judge Forrest noted with "grave concern" that Ragbir may have been targeted for his speech on immigration matters. She described Ragbir as a Legal Permanent Resident since 1994, living in Brooklyn, with his wife and daughter, both of whom are American citizens, and the Executive Director of the New Sanctuary Coalition of New York City, on the Steering Committee of the New York State Interfaith Network for Immigration Reform, and has  having served as the Chair of the Board of Families for Freedom.

The underlying immigration dispute involves what the judge called a "mysterious 'travel document,'" but the Judge found that this document should not decide the case: 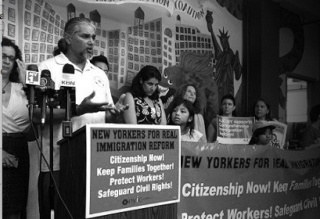 here.    But there are times when statutory schemes may be  implemented in ways that tread on rights that are larger, more fundamental. Rights that define who we are as a country, what we demand of ourselves, and what we have guaranteed to each other: our constitutional rights. That has occurred  here.

In sum, the Court finds that when this country allowed petitioner to become  a part of our community fabric, allowed him to build a life with and among us and  to enjoy the liberties and freedom that come with that, it committed itself to  allowance of an orderly departure when the time came, and it committed itself to  avoidance of unnecessary cruelty when the time came. By denying petitioner these  rights, the Government has acted wrongly.

Judge Forrest grounded her finding in the Due Process Clause of the Fifth Amendment:

But if due process means anything at all, it means that we must look at the totality of circumstances and determine whether we have dealt fairly when we are depriving a person of the most essential aspects of life, liberty, and family. Here, any examination of those circumstances makes clear that petitioner’s liberty interest, his interest in due process, required that we not pluck him out of his life without a moment’s notice, remove him from his family and community without a moment’s notice. The process that was due here is not process that will allow him to stay indefinitely - - - those processes have been had.  The process that is due here is the allowance that he know and understand that the time has come, that he must organize his affairs, and that he do so by a date  certain. That is what is due. That is the process required after a life lived among  us.

Here, instead, the process we have employed has also been unnecessarily cruel. And those who are not subjected to such measures must be shocked by it, and  find it unusual.” That is, that a man we have allowed to live among us for years, to  build a family and participate in the life of the community, was detained,  handcuffed, forcibly placed on an airplane, and today finds himself in a prison cell.  All of this without any showing, or belief by ICE that there is any need to show,  that he would not have left on his own if simply told to do so; there has been no  showing or even intimation that he would have fled or hidden to avoid leaving as  directed. And certainly there has been no showing that he has not conducted  himself lawfully for years. Taking such a man, and there are many such men and  women like him, and subjecting him to what is rightfully understood as no different  or better than penal detention, is certainly cruel.    We as a country need and must not act so. The Constitution commands better.

Constitutional principles of due process and the avoidance of unnecessary cruelty here allow and provide for an orderly departure. Petitioner is entitled to the freedom to say goodbye.