The United States Supreme Court heard oral arguments in Dalmazzi v. United States in which the complicated issue is whether 10 U.S.C. § 973(b)(2)(A)(ii), the so-called dual-officeholding ban, prohibits military officers from holding or exercising the functions of a “civil office” requiring a presidential nomination and Senate confirmation “except as otherwise authorized by law.”  The case is made more complicated by the threshold issue of whether the Court has power to review the case.  Amy Howe has a good discussion of the oral argument on SCOTUSblog.

A notable highlight of the argument was when Justice Kennedy asked ConLawProf Stephen Vladeck, arguing for the petitioners, whether Chief Justice John Marshall was correct in  Marbury v. Madison. 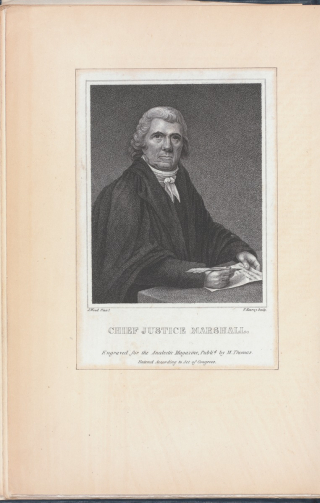 JUSTICE KENNEDY:  Do you think Marbury versus Madison is right?

JUSTICE KENNEDY:  Particularly as to the interpretation with such exceptions as Congress may make.

VLADECK: So, I will confess, Justice Kennedy, that I may perhaps belong in the school of scholars who thinks that Chief Justice Marshall read both the statute and the Constitution to reach the constitutional questions he wanted to reach. I'm not sure that he nevertheless didn't end up with the right -- with the wrong answer. And, again, I think, for purposes of the question presented in this case on this Court's jurisdiction, the more relevant case is not Marbury but [Ex Parte] Bollman [1807].

And if I may, Mr. Chief Justice, I'd like to reserve my time.

ConLawProfs and ConLaw students engaging with Marbury v. Madison could not ask for a more current example of the continuing relevance of the case.  And for enhanced learning, try the CALI Lesson on the case or these ideas.