Oppenheimer mentions the plans of the President and Attorney General Sessions to challenge affirmative action policies in higher education as a form of discrimination against white people and predicts that they will eventually use  Dr. King’s “I Have A Dream” speech as evidence that Dr. King would be supporting their position if he were still alive.  The President's Proclamation for MLK Day does not mention affirmative action (or civil rights), but does allude to King's most famous speech by including the arguably "color-blind" rejecting judgment based on "color of their skin" in favor of "content of their character." (The Proclamation states "Dr. King advocated for the world we still demand — where the sacred rights of all Americans are protected, rural and urban communities are prosperous from coast to coast, and our limits and our opportunities are defined not by the color of our skin, but by the content of our character.") 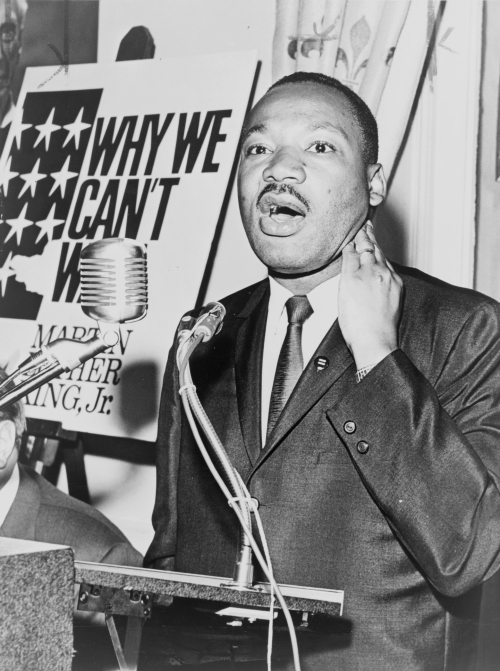 Yet as Professor Oppenheimer argues it is simplistic - - - and incorrect - - - to conclude that Martin Luther King's political theorizing can be reduced to a convenient "color-blind" position. Oppenheimer writes:

While I have found no instance of Rev. Dr. Martin Luther King, Jr. ever using the term “affirmative action,” forty-eight years after his assassination his name is often invoked in the affirmative action debate by opponents of race-based affirmative action, who cite Dr. King’s “I have a dream” speech as evidence that he supported “color-blind” policies, and thus presumably would have opposed race-conscious affirmative action. But when we examine the historical record it is clear that while Dr. King dreamed of a time when racism – and thus race – would be irrelevant, he was a supporter of both of these forms of affirmative action. On the one hand, he spent much of the last six years of his life actively promoting what we would describe today as race-conscious affirmative action, including the use of racial quotas in employment. Specifically, from 1962-68 Dr. King orchestrated and implemented “Operation Breadbasket,” a civil rights boycott campaign that demanded employment quotas for Black American workers based on their numbers in a workforce, neighborhood or city. Yet on the other hand, with regard to class-based affirmative action, Dr. King supported a massive war on poverty.  In advocating for special benefits for poor Americans he sometimes used color-blind language and pointed out that it would benefit poor whites as well as poor Blacks, while at other times he justified it as an example of the kind of reparations to which Black Americans were entitled under the equitable remedy of restitution for unpaid wages.

In his discussion of the constitutional law doctrine and theory surrounding affirmative action, Oppenheimer includes the United States Supreme Court's reaction to organized efforts to mandate affirmative action in Hughes v. Superior Court for Contra Costa County (1948) in which the Court stated:

that the picketing here involved, and upon which the judgment of contempt is based, was for the attainment of an unlawful objective, viz.: not to induce Lucky [grocery store] not to discriminate against, but, rather, expressly to compel Lucky to discriminate arbitrarily in favor of, one race as against all others in the hiring of a portion of its clerks; and that therefore the injunction was properly issued and the judgment of contempt should stand. With this position, upon the record here, we must agree.

Oppenheimer writes that while the Supreme Court was willing to affirm the legitimacy of protesting discrimination, but unwilling to give any approval to demands for proportional hiring, the demands for "proportional hiring nonetheless persisted, and would become a critical part of Dr. King’s campaign for racial justice in the last six years of his life."

It seems pretty clear that MLK supported what is now known as  "affirmative action."