While our recent attention has been focused on the character and the lack of  gender diversity of those who occupy judicial positions, the question of the role of the judiciary in a constitutional democracy is broader.  In an article entitled Judicial Review and Sexual Freedom published over a decade ago, I discussed the common conceptions that judicial review was the United States' most renowned legal export while exploring the ways in which it remained contested in the area of basic sexual equality. In his forthcoming article in Tulane Law Review, Judicial Supremacy in Comparative Constitutional Law, Manoj Mate "challenges the prevailing conception of judicial supremacy in comparative constitutional law as informed by U.S. and western models of constitutionalism, and argues for reconceptualizing judicial supremacy in a way that captures the broader range of institutional roles courts play globally."

Mate takes as his central example the Supreme Court of India - - - which has one woman out of its 25 judges  - - - and  discusses in detail the cases and circumstances which lead to the present situation in which "India remains the only constitutional system in the world in which the Chief Justice of India (and the collegium of justices) enjoy primacy in judicial appointments."  The Supreme Court of India has also played a determining role in curbing government corruption and managing public interest litigation.

Mate interestingly argues that the "supremacy of the Indian Supreme Court is not purely a product of the assertion of political power by political regimes who construct judicial review to advance political or partisan agendas and goals," but instead has operated in the particular conditions of India as a powerful force "for protecting constitutionalism and optimizing governance." In short, judicial review has not operated as anti-democratic but as staunchly democratic.

Mate concludes that India's "more pragmatic model of judicial supremacy" can be a model "for newer constitutional democracies across the globe." But Mate's article opens with a statement from Presidential advisor Stephen Miller in reference to judicial decisions regarding the constitutionality of the presidential travel ban as examples of judges taking "power for themselves that belongs squarely in the hands of the president of the United States."  When criticism of the judicial role is heightened, it does seem fitting that judges must act pragmatically to protect democracy. 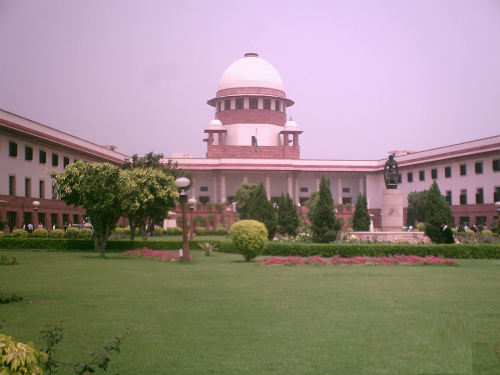 [Supreme Court of India building via]

I comment upon the cited assertion by Stephen Miller that judges ruling on the "travel ban" (which the President, as a candidate, described openly as a "Muslim ban") are taking power from the President: restricting the power of the political branches, when they threaten our constitutional rights, is exactly what the Constitution itself requires. How else will those rights be protected? This is only startling or controversial to political elites and others who wish to use government power to to advance their oppressive and/or corrupt political agendas. That most Americans only see judicial review as valuable when it operates to reverse political decisions that they disfavor only makes the situation worse.