Adding to its docket on the issue of partisan gerrymandering, the Court agreed to hear the merits of Benisek v. Lamone, regarding Maryland's redistricting law, decided by a three judge court in August 2017.

Recall that the Court heard oral arguments in Gill v. Whitford on October 3, 2017.  In Gill, arising in Wisconsin, the question of whether partisan gerrymandering is best analyzed under the Equal Protection Clause or under the First Amendment inflected the oral arguments.

The three judge court opinion in Benisek deciding on the application of a preliminary injunction was divided. A majority of the  found that the case essentially rejected the challengers' arguments, seemingly finding that the claims were not justiable and that they did not have merit, but ultimately resting on a decision that the matter should be not be decided pending the outcome in Gill v. Whitford and thus denying the motion for preliminary injunction.  In an extensive dissenting opinion, Fourth Circuit Judge Paul Niemeyer makes a compelling argument that the redistricting of Maryland's Sixth District by the Democratic leadership diluted the votes of Republicans. Judge Niemeyer advanced a First Amendment standard to redressing unconstitutional partisan gerrymandering as:

(1) “those responsible for the map redrew the lines of his district with the specific intent to impose a burden on him and similarly situated citizens because of how they voted or the political party with which they were affiliated,”
(2) “the challenged map diluted the votes of the targeted citizens to such a degree that it resulted in a tangible and concrete adverse effect,” and
(3) “the mapmakers’ intent to burden a particular group of voters by reason of their views” was a but-for cause of the “adverse impact.”

Applying that standard, Judge Niemeyer would have found it clearly violated by the Sixth District. 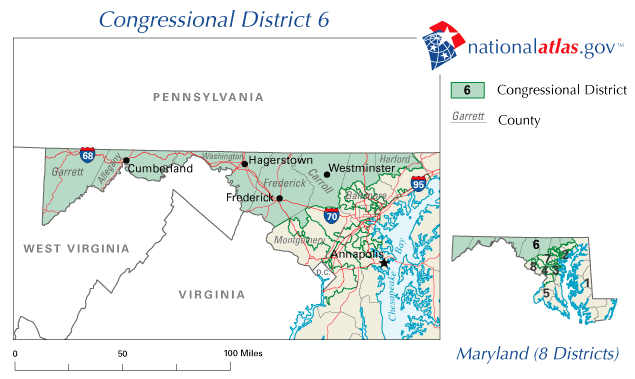 While both the majority and Judge Niemeyer's dissent agree that partisan gerrymandering is "noxious" and destructive, the panel clearly divides on what the judiciary can or should do.  For Niemeyer, judicial abdication "would have the most troubling consequences":

If there were no limits on the government’s ability to draw district lines for political purposes, a state might well abandon geographical districts altogether so as to minimize the disfavored party’s effectiveness. In Maryland, where roughly 60% of the voters are Democrats and 40% Republicans, the Democrats could create eight safe congressional districts by assigning to each district six Democrats for every four Republicans, regardless of the voters’ geographical location. In a similar vein, a Republican government faced with these same voters could create a map in which two districts consisted entirely of Democrats, leaving six that would be 53% Republican. Such a paradigm would be strange by any standard. A congressman elected in such a system could have constituents in Baltimore City, others in Garrett County, and yet others in the suburbs of Washington, D.C., preventing him from representing any of his constituents effectively. Similarly, members of a single household could be assigned to different congressional districts, and neighbors would be denied the ability to mobilize politically. Such partisan gerrymandering, at its extreme, would disrupt the “very essence of districting,” which “is to produce a different ... result than would be reached with elections at large, in which the winning party would take 100% of the legislative seats.” [citing Gaffney v. Cummings (1973)].

The role that Benisek will play as an addition to Gill v. Whitford in the Court's consideration of partisan gerrymandering is unclear, but several differences between the cases might be worth noting.  First, Benisek centers the First Amendment analysis rather than the Equal Protection Clause or a combination.  Second, Benisek involves one district within the state rather than the state as a whole.  And third, the redistricting in Maryland involved in Benisek is the Democratic party in power, while the redistricting in Wisconsin in Gill v. Whitford is the Republican party in power.  What, if any, difference these differences may ultimately make - - - and whether the Court will render the decisions of these cases close together - - - remains to be determined.