Recall that this lawsuit, filed by lawyers for the National Center for Lesbian Rights (NCLR) and GLBTQ Legal Advocates and Defenders (GLAD) is one of several complaints challenging the president's military action, and included claims for a violation of equal protection, due process, and a nonconstitutional argument of equitable estoppel.

Judge Kollar-Kotelly's 76 page opinion, which begins with a recitation of the President's "statement via Twitter" on July 26, 2017, announcing that “the United States Government will not accept or allow transgender individuals to serve in any capacity in the U.S. Military.” This was followed almost a month later by the 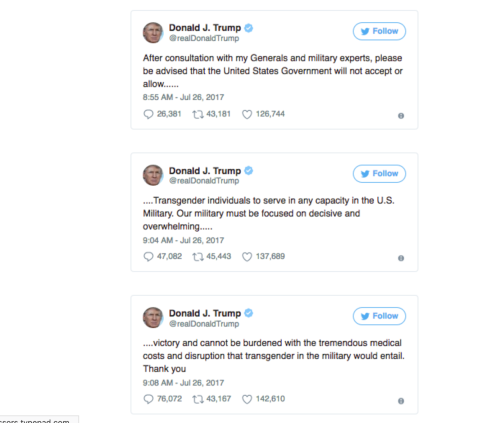 President's Memorandum for the Secretary of Defense and Secretary of Homeland Security through the Office of the Press Secretary directing the halt of accession of transgender individuals into the military and the halt of all resources "to fund sex-reassignment surgical procedures for military personnel, except to the extent necessary to protect the health of an individual who has already begun a course of treatment to reassign his or her sex." The President's Twitter statement and the subsequent Presidential memorandum are the centerpiece of the Government's argument that the plaintiffs lack standing and that their claims are not ripe under Article III.

Defendants have moved to dismiss this case, principally on the basis that the Court lacks jurisdiction. Although highly technical, these jurisdictional arguments reduce to a few simple points: the Presidential Memorandum has not effected a definitive change in military policy; rather, that policy is still subject to review; until that review is complete, transgender service members are protected; and any prospective injuries are too speculative to require judicial intervention.

These arguments, while perhaps compelling in the abstract, wither away under scrutiny.

Judge Kollar-Kotelly's opinion then spends the majority of the opinion discussing the standing and ripeness issues. As to the Surgery challenge, the opinion concludes that "none of the Plaintiffs have demonstrated an injury in fact with respect to the Sex Reassignment Surgery Directive," because none of the "Plaintiffs have demonstrated that they are substantially likely to be impacted by the Sex Reassignment Surgery Directive"  In fact, the plaintiffs' medical procedures would be performed.  However, there was standing on the Accession and Retention Directives because although an Interim Guidance possibly protects some transgender service members and allows for waivers,

The President controls the United States military. The directives of the Presidential Memorandum, to the extent they are definitive, are the operative policy toward military service by transgender service members.

Moreover, "the injury in fact element of standing in an equal protection case is the denial of equal treatment resulting from the imposition of the barrier.”

Compared to the extensive analysis of the Article III issues, Judge Kollar-Ketelly's analysis of the equal protection claim based on the Fifth Amendment is much more succinct. The opinion first determines the level of scrutiny, deciding on intermediate scrutiny for two reasons.

First, "on the current record, transgender individuals—who are alone targeted for exclusion by the Accession and Retention Directives—appear to satisfy the criteria of at least a quasi-suspect classification," considering  whether they have "experienced a ‘history of purposeful unequal treatment’ or been subjected to unique disabilities on the basis of stereotyped characteristics not truly indicative of their abilities," and whether they have been as a group “relegated to such a position of political powerlessness as to command extraordinary protection from the majoritarian political process," and whether the group “exhibit[s] obvious, immutable, or distinguishing characteristics that define them as a discrete group.” Judge Kollar-Ketelly found that transgendered people satisfied these criteria, noting that although there was no binding precedent on this issue, other courts had reached similar conclusions and citing Evancho v. Pine-Richland Sch. Dist.

Second, Judge Kollar-Ketelly was "also persuaded that the Accession and Retention Directives are a form of discrimination on the basis of gender, which is itself subject to intermediate scrutiny. It is well-established that gender-based discrimination includes discrimination based on non- conformity with gender stereotypes."

In the application of intermediate scrutiny, Judge Kollar-Ketelly recited the rule of United States v. Virginia (VMI) (1996), and held that the Accession and Retention Directives relied on overbroad stereotypes and were not substantially related to the Government's stated interests.  The opinion then considered the question of deference in the military context:

The opinion also considered "the circumstances surrounding the announcement of the President’s policy":

the President abruptly announced, via Twitter—without any of the formality or deliberative processes that generally accompany the development and announcement of major policy changes that will gravely affect the lives of many Americans—that all transgender individuals would be precluded from participating in the military in any capacity. These circumstances provide additional support for Plaintiffs’ claim that the decision to exclude transgender individuals was not driven by genuine concerns regarding military efficacy.

Finding a likelihood of success on the merits of the equal protection claim, the opinion quickly dispatched the other considerations used in evaluating the issuance of a preliminary injunction, finding them met.

Expect the government to appeal as well as opinions in the other pending cases.