The second Monday in October is designated as Columbus Day, the day that Italian mariner Christopher Columbus allegedly first saw the "New World," but is increasingly commemorated as Indigenous Peoples Day, recognizing that Native Americans did not necessarily benefit from European colonization.

A good read is Oneida Nation scholar Doug Kiel's article, Bleeding Out: Histories and Legacies of Indian Blood ” in  The Great Vanishing Act: Blood Quantum and the Future of Native Nations (2017).  Kiel writes of the European preoccupation with "blood" as a source of identity - - - and white supremacy - - -  tracing it to the Spanish Inquisition and anxieties about"Christian blood" being contaminated by Jewish and Muslim blood. Moreover, he contrasts Native racial status to the "one-drop rule” of "African American hypodescent, according to which individuals of mixed ancestry only inherit the status of their black kin, with “African blood” polluting all other types of 'blood.'" On the other hand,  “white blood” has the capacity to fully absorb “Indian blood" according to early cases, as well as more recent ones. For example, Kiel notes that Justice Alito's opinion for the Court in Adoptive Couple v. Baby Girl (the "Baby Veronica" case), begins by describing the blood quantum of the child: " (Baby Girl) who is classified as an Indian because she is 1.2% (3/256) Cherokee."  Other possibilities for identity, including nationality and culture, are flattened.

The erasure of Native identity is one argument against the celebration of Columbus Day.  Last year, in the Presidential Proclamation for Columbus Day, then-President Obama expressed recognition for the rationales of Indigenous People's Day:

As we mark this rich history, we must also acknowledge the pain and suffering reflected in the stories of Native Americans who had long resided on this land prior to the arrival of European newcomers. The past we share is marked by too many broken promises, as well as violence, deprivation, and disease. It is a history that we must recognize as we seek to build a brighter future -- side by side and with cooperation and mutual respect. We have made great progress together in recent years, and we will keep striving to maintain strong nation-to-nation relationships, strengthen tribal sovereignty, and help all our communities thrive.

In the Presidential Proclamation for Columbus Day this year, current-President Trump does not acknowledge Native or Indigenous peoples. 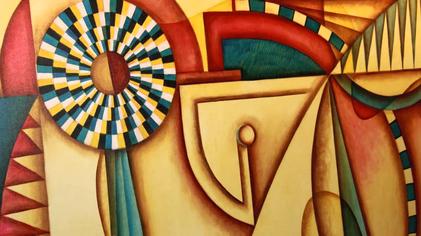 image: "My World is Not Flat,"