In a Complaint filed today in the Eastern District of New York in New York v. Trump, fifteen states and the District of Columbia have challenged the rescission of DACA, the Deferred Action for Childhood Arrivals program, covering 800,000 people in the United States who are not citizens but who have been residents since childhood.  The rescission was promised by President Trump, announced by Attorney General Jefferson Sessions, and is now in a Memorandum from the Department of Homeland Security, although some of the details of the rescission remain murky.  The complaint describes the rescission as "animus-driven."

The first cause of action is based on the Equal Protection component of the Due Process Clause of the Fifth Amendment, and alleges that the rescission targets individuals based on their national origin and is based, at least in part, by the desire to harm a particular group. Paragraphs 239-252 detail the statements by Trump, both as a candidate and as President, expressing anti-Mexican sentiments.  Part of these allegations include the controversial pardon of former Maricopa County, Arizona Sheriff Joe Arpaio. As for the timing of the rescission, the complaint also contains allegations regarding Texas, alleging that a "demand that President Trump eliminate DACA is part of a history of intentional discrimination against Latinos/Hispanics by the State of Texas" (¶256) and then detailing federal court findings that Texas has been found liable for "engaging in unlawful discrimination based on race and/or national origin."  Among the cases cited is the recent Perez v. Abbott concerning redistricting.

The second cause of action sounds in Due Process, arguing a breach of "fundamental fairness" relating to information use.  Specifically, ¶278 avers:

Given the federal government’s representations about the allowable uses of information provided by DACA applicants, a refusal to prohibit the use of information contained in DACA applications and renewal requests for purposes of immigration enforcement, including identifying, apprehending, detaining, or deporting non-citizens, is fundamentally unfair.

Two other causes of action relate to the Administrative Procedure Act - - - arbitrary and capricious action and failure to follow notice and comment - - - while the final cause of action is based on the Regulatory Flexibility Act, requiring federal agencies to "analyze the impact of rules they promulgate on small entities and publish initial and final versions of those analyses for comment."

The extensive allegations in the complaint by individual states include statements regarding each state's harm if DACA were rescinded in an effort to establish each state's standing.  In addition to New York, the plaintiffs are Massachusetts, Washington, Connecticut, Delaware, District of Columbia, Hawaii, Illinois, Iowa, New Mexico, North Carolina, Oregon, Pennsylvania, Rhode Island, Vermont, and Virginia. Generally, the allegations pertaining to each states detail the effect on their state colleges and universities, state companies, and state economies.

The complaint is a serious challenge to the DACA rescission and in some ways is similar to the ongoing state challenges to the so-called Muslim travel ban, another highly controversial Trump administration action still in litigation. 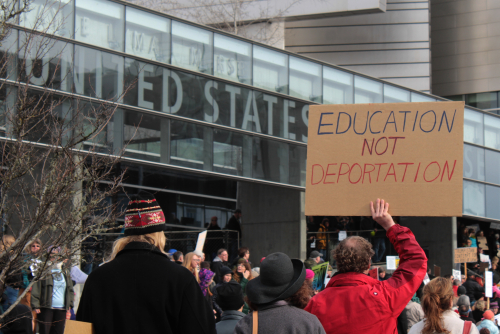