The Ninth Circuit's opinion in American Beverage Association v. City and County of San Francisco, reversing the district judge, found that San Francisco's ordinance requiring a warning about the health effects of sugary drinks likely violated the First Amendment and should be enjoined.

The ordinance required advertisements for sugar-sweetened beverages (SSB) to include a statement:

WARNING: Drinking beverages with added sugar(s) contributes to obesity, diabetes, and tooth decay. This is a message from the City and County of San Francisco.

The ordinance not only defined SSBs, but also required that the warning "occupy 20 percent of the advertisement and be set off with a rectangular border."

The Ninth Circuit panel's opinion, authored by Judge Ikuta, applied the well-known Zauderer v. Office of Disciplinary Counsel of Supreme Court of Ohio (1985) First Amendment standard for disclosures in the context of commercial speech, joining a previous Ninth Circuit panel regarding Berkeley's cell-phone warnings as well as sister-circuits in applying Zauderer beyond the context of preventing consumer deception.

Judge Ikuta articulated the Zauderer factors as requiring that the compelled disclosure be factual and non-controversial, that it not be “unjustified or unduly burdensome” so that it chills protected commercial speech, and that there is a substantial government interest to which the mandated disclosure is reasonably related.   Applying the factors, Judge Ikuta's opinion concluded that the mandated disclosure failed both the "factual and noncontroversial" factor and the not unduly burdensome factor.

Regarding the noncontroversial factor, Judge Ikuta reasoned that it was not so much that the warning was untrue as to the drinks defined as SSB, mostly sodas, but that it did not extend to "other products with equal or greater amounts of added sugars and calories."

By focusing on a single product, the warning conveys the message that sugar-sweetened beverages are less healthy than other sources of added sugars and calories and are more likely to contribute to obesity, diabetes, and tooth decay than other foods.This message is deceptive in light of the current state of research on this issue. According to the FDA, “added sugars, including sugar-sweetened beverages, are no more likely to cause weight gain in adults than any other source of energy.”  The American Dental Association has similarly cautioned against the “growing popularity of singling-out sugar-sweetened beverages” because “ the evidence is not yet sufficient to single out any one food or beverage product as a key driver of dental caries.”

[citations omitted]. San Francisco sought to distinguish SSBs as unique because they are more likely to be over-consumed, but the opinion noted that the risk of over-consumption was not the risk addressed by the warning. 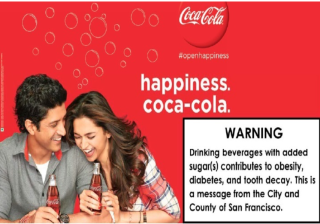 Having found that the challengers were likely to succeed on the First Amendment merits, the panel then found that the other factors for preliminary injunction weighed in favor of enjoining the ordinance.

Thus, like the New York City attempt to regulate super-size sodas, the San Francisco ordinance makes another unsuccessful attempt to require warnings on products in an effort to change health habits.

So "Consuming too many SSB and other foods with sugar-added may cause . . ." without the black box may have survived the motion