In his opinion in Silberberg v. Board of Elections of New York, Senior District Judge P. Kevin Castel upheld the constitutionality of two New York provisions restricting photographs related to elections.  N.Y. Election Law §17-130(10) makes it a misdemeanor to show one's ballot after it has been prepared for voting to any person and has been interpreted to prohibit the taking and posting on social media of so-called "ballot selfies." Less centrally, the New York City Board of Elections had a policy that prohibits photography at polling sites. The challengers argued that both of these provisions infringed on their First Amendment rights.

In the present opinion, Judge Castel, after a bench trial, more carefully analyzed the First Amendment claims. On the N.Y. Election Law §17-130(10) challenge, he concluded that despite the age of the statute, it plain language, underlying purpose, and likely legislative intent all supported the interpretation that the statute did prohibit ballot-selfies.  He then concluded that the statute did restrict political speech and was thus subject to strict scrutiny.

Judge Castel relied in large part on Burson v. Freeman (1992) in which the Court upheld a prohibition of campaigning within 100 feet of a polling place, noting that the Tennessee statute at issue in Burson was also first enacted in 1890 and "intended to combat the same evils that the 1890 New York statute was intended to combat; vote buying and voter intimidation." Judge Castel found that both of these interests were compelling as well as actual.  Distinguishing the recent First Circuit decision in Rideout v. Gardner, Judge Castel reasoned:

Plaintiffs urge this Court to follow Rideout v. Gardner, where the First Circuit, in upholding the district court’s injunction against the enforcement of a New Hampshire statute updated in 2014 to specifically prohibit the sharing via social media of a digital photograph of a marked ballot, found that the statute did not address an “actual problem in need of solving.”  In that case, decided on summary judgment, virtually no specific evidence was presented regarding vote buying or voter intimidation in New Hampshire. In the present case, ample evidence has been presented regarding vote buying and voter intimidation in New York, both historic and contemporary. And New Hampshire is not New York City. New York elections were bought and sold for decades before the introduction of the Australian ballot reforms. The statute was an appropriate response to the political corruption in New York in 1890 and is a valid measure today to prevent that history from repeating itself. 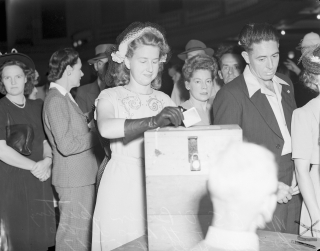 Judge Castel also found the criminalization was narrowly tailored, again relying in large part on Burson. Castel also noted that the challengers had put forth no acceptable alternative and also discussed the issue of "social coercion," reasoning that employers and other organizations could use the ballot selfie to "enforce political orthodoxy."

As an alternative ground, Judge Castel concluded that the election statute was not necessarily subject to strict scrutiny because although it was a content-based restriction, it occurred in a non-public forum. The polling site was not a public forum: the sites are "opened by the government only for the specific purpose of enabling voters to cast ballots and are not historically open for public debate or speech."  Relatedly, the ballot itself is not a public forum, relying on cases such as Burdick v. Takushi (1992). Judge Castel then found that the restrictions were "reasonable."

In a few pages, Judge Castel dispatched the challenge to the City's unwritten policy of prohibiting photography at polling places.  Judge Castel found this 20 year old policy was content-neutral and again relied on the finding that the polling sites were not public fora. However, even if the sites were public fora, there were ample alternative means for political expression.

Judge Castel therefor rendered final judgment for the government defendants, allowing for appeal to the Second Circuit.  Given the First Circuit's opinion in Rideout with a contrary result, this may be the next step to a circuit split on the issue of ballot selfies.