In its extensive and detailed opinion in Perez v. Abbott, a three judge court found problems including intentional racial discrimination in some aspects of Plan C235, the redistricting plan enacted by the Texas Legislature in 2013.

Authored by United States District Judge Xavier Rodriguez, joined by Chief Judge for the Western District of Texas District Judge Garcia, and Fifth Circuit Judge Jerry Smith, the panel opinion is another episode in the ongoing litigation regarding redistricting in Texas.  The opinion itself is an interlocutory order, with the remedial phase to follow.  Additionally, as in most redistricting litigation, there is a mix of determinations under the Voting Rights Act and the Equal Protection Clause.

Perhaps one of the more interesting issues in the case involves the court's findings regarding intentional discrimination. The court considered the Shaw v. Reno racial gerrymandering claims elaborating on the strict scrutiny standard if racial classifications could be proven.The court rejected the state's position that the discriminatory intent inquiry was limited to the drawing of district lines in 2013, but relying on Fifth Circuit precedent found that the challengers could demonstrate "either through direct or circumstantial evidence that the government body adopted the electoral scheme with a discriminatory purpose, that the body maintained the scheme with discriminatory purpose, or that the system furthered pre-existing intentional discrimination." The court stated:

The decision to adopt the interim plans was not a change of heart concerning the validity of any of Plaintiffs’ claims . . . . {in previous litigation} and was not an attempt to adopt plans that fully complied with the VRA and the Constitution—it was a litigation strategy designed to insulate the 2011 or 2013 plans from further challenge, regardless of their legal infirmities. The letter from then-Attorney General Abbott to Speaker Joe Straus makes the strategy clear: Abbott advised that the “best way to avoid further intervention from federal judges in the Texas redistricting plans” and “insulate the State’s redistricting plans from further legal challenge” was to adopt the interim maps. Thus, Defendants sought to avoid any liability for the 2011 plans by arguing that they were moot, and sought to ensure that any legal infirmities that remained in the 2013 plans were immune from any intentional discrimination and Shaw-type racial gerrymandering claims.

The court did reject some of the challengers other claims, although finding that MALC (a Latino legislative caucus of Texas members in the House of Representatives) had standing, it rejected the claim that there was intentional discrimination in a specific "Latino opportunity district."

The court's summary of its more than 100 page opinion is useful:

The court directed the Texas Attorney General to provide a "written advisory within three business days stating whether the Legislature intends to take up redistricting in an effort to cure these violations and, if so, when the matter will be considered." 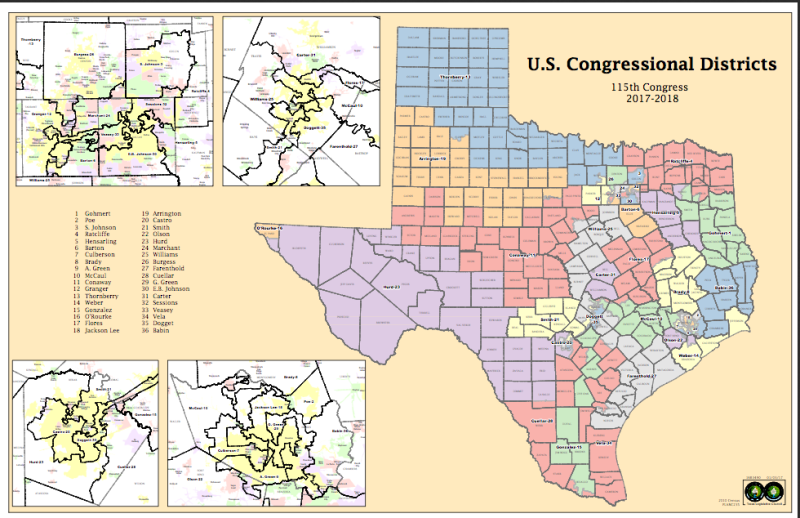