Late Friday August 25, President Trump issued a Memorandum for the Secretary of Defense and Secretary of Homeland Security through the Office of the Press Secretary directing the halt of accession of transgender individuals into the military and the halt of all resources "to fund sex-reassignment surgical procedures for military personnel, except to the extent necessary to protect the health of an individual who has already begun a course of treatment to reassign his or her sex."  By Monday, there were at least three lawsuits challenging the action on constitutional grounds.

A month before, Trump had tweeted his thoughts regarding transgender individuals in the military, reportedly taking military officials by surprise. 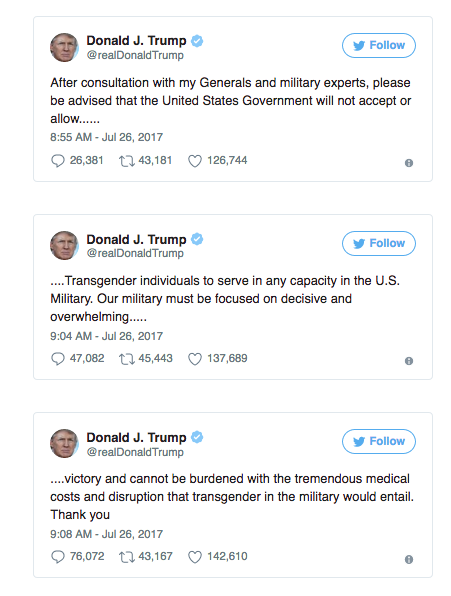 Soon after the tweets, the complaint in Doe v. Trump was filed by lawyers for the National Center for Lesbian Rights (NCLR) and GLBTQ Legal Advocates and Defenders (GLAD) in the District Court for the District of Columbia, challenging any military action on the basis of a violation of equal protection, due process, and a nonconstitutional argument of equitable estoppel.

On the core challenge of equal protection - - - as applied to the federal government through the Fifth Amendment - - - the complaints vary in their detail and possible theories.  In Doe, the NCLR and GLAD complaint, paragraph 71 reads: "The categorical exclusion of transgender people from military service lacks a rational basis, is arbitrary, and cannot be justified by sufficient federal interests." In Stone, the ACLU complaint, paragraph 140 contends that transgender classifications should be treated as sex classifications, deserving heightened scrutiny, and additionally in the next paragraph that transgender status itself warrants heightened scrutiny because "men and women who are transgender, as a class" have historically been subject to discrimination, have a defining characteristic that frequently bears no relation to an ability to contribute to society, exhibit immutable or distinguishing characteristics that define them as a discrete group, and are a minority with relatively little political power.  In Karnoski, the complaint contends that in addition to sex-discrimination, discrimination on the basis of transgender status "bears all the indicia of a suspect classification requiring strict scrutiny by the courts," enumerating similar criteria including history of discrimination, discrete and insular minority, no relation to ability to contribute to society, and arguing the characteristic sometimes expressed as immutability in stating that "gender identity is a core, defining trait" so "fundamental to one's identity and conscience that a person should not be required to abandon it as a condition of equal treatment."

However, whatever standard of scrutiny is applied, all the complaints contend that there is not a sufficient government interest in the policy - - - an argument that may well lead into judicial inquiry into Trump's unorthodox announcement on Twitter as well as any details of thoughtful decision-making.

While there has been some reporting that military officials have discretion in implementing Trump's directives, professors of military law have issued a worth-reading policy statement that the discretion is quite limited; they also argue that the directives are discriminatory and based on inaccuracies.

This litigation is certain to accelerate. Expect more action from the NCLR and GLAD action filed before the Friday policy announcement and requests for preliminary relief.