In a well reasoned opinion in Davison v. Loudon County Board of Supervisors, United States District Judge James Cacheris of the Eastern District of Virginia found that a politician who reacted to a constituent's comment on her "official" Facebook post by deleting his comment and banning him from her Facebook page violated the First Amendment.

Phyllis Randall, Chair of the Loudon County Board of Supervisors, maintained a Facebook page, entitled "Chair Phyllis J. Randall." She generally "uses the Facebook page to share information of interest with the County she serves," and Judge Cacheris provided several examples of the types of postings - - - precisely the type of postings one would expect - - - relating to proclamations such as "Loudon Small Business Week" and photographs of herself at conferences or other events.

As a threshold matter, Judge Cacheris determined that there was state action.  This state action, however, could not be attributed to the defendant County Board of Supervisors, but only as to Phyllis Randall. Although the Facebook page was not the "property" of the county and would not revert to it when Randall left office, Randall "used it as a tool of governance." The judge found that Randall used the page to communicate with her constituents and the page reflects her efforts to "swathe" it with "the trappings of her office." Further, there were other government employees who assisted with the page.  Moreover, the specific act of banning the constituent Davison arose out of public rather than private circumstances.  Davison had apparently complained about the corruption of Randall's colleagues on the Board (the actual post, having been deleted by Randall, was not before the judge).

Judge Cacheris referenced two of the Supreme Court's decisions last Term - - - Packingham v. North Carolina opinion, noting that Facebook had become a vital platform for speech and the exchange of ideas, and Matal v. Tam, noting that if anything is clear, "it is that speech may not be disfavored by the government simply because it offends." The judge held that it was unnecessary to decide what type of "forum" under the First Amendment the Facebook page might be, given that under no forum is viewpoint discrimination permissible. Here, the judge held, Randall clearly banned Davison because of the opinion he expressed.  There was no neutral policy (such as a ban on profanity) which was being neutrally applied. 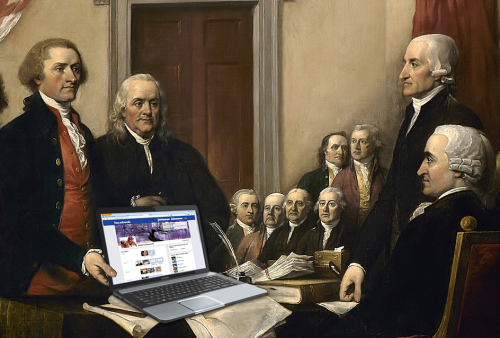 The judge observed that Davison was banned only for a short time - - - Randall retracted her ban the next morning - - - and that during this time, Davison had adequate means to communicate his message through other avenues.  Nevertheless, the judge stated that

Indeed, the suppression of critical commentary regarding elected officials is the quintessential form of viewpoint discrimination against which the First Amendment guards.  By prohibiting Plaintiff from participating in her online forum because she took offense at his claim that her colleagues in the County government had acted unethically, Defendant committed a cardinal sin under the First Amendment.

The judge issued a declaratory judgment in favor of Davison, who represented himself pro se, on the First Amendment claim, although the judge rejected a procedural due process claim that Davison had also advanced.

This case should serve as a wake-up call for politicians who use their "official" Facebook pages in ways that may violate the First Amendment.  The case may also be a harbinger of decisions to come in the ongoing litigation challenging the President's practice of "blocking" people on Twitter.

[image by Matt Shirk via]

I am the litigant. Note that this particular case was a proxy for a larger ongoing case I have against the Loudoun school board. I did not file the complaint in this case against Randall when originally filed in July 2016. Randall had reversed the block quickly, thus making the violation moot. However, when her attorney argued that Randall could block me at any point in the future, the issue became ripe and I filed an amended complaint.

Of course, the reason the attorney made that argument was because she was also representing 5 members of the Loudoun school board who have blocked me for criticism on their social media pages for 2 years now. Randall was set up by her attorney who had her own conflict of interest. The school board case (1:16-CV-540) has been awaiting a decision on a motion to dismiss for nearly 8 months now.