Daily Read: On the 50th Anniversary of Loving, A Look at its Portrayal in Film

In Loving v. Virginia, decided June 12, 1967, the United States Supreme Court unanimously held that the Virginia statute criminalizing marriage between White and (most)non-White persons violated the Equal Protection and Due Process Clauses of the Fourteenth Amendment.  The case has become an iconic one, not only because it explicitly states that the Virginia law was "obviously an endorsement of the doctrine of White Supremacy," but also because it identifies the "freedom to marry" as "one of the vital personal rights essential to the orderly pursuit of happiness by free men."

Creighton Law Review hosted a symposium for the 50th anniversary of the case and the issue is just published. 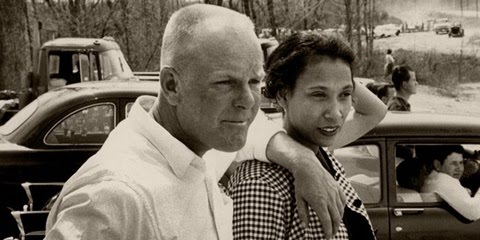 Among the terrific articles is one that considers the Hollywood film, released last year, as well as the previous documentary.  In the important contribution Filmic Contributions to the Long Arc of the Law: Loving and the Narrative Individualization of Systemic Injustice, Alanna Doherty argues that the film, and to a lesser extent the documentary "repackages the Lovings’ historic civil rights struggle against wider systemic oppression as a personal victory won by triumphant individuals through the power of love."  This individualization through narrative, she argues, obscures the collective and civil rights struggle that is the ground of the action the film portrays. Likewise, the "White Supremacy" of the state is attributed to a few rogue individuals. Doherty argues that such individualization is not only limited, but also accounts for the post-Loving developments in equality doctrine regarding affirmative action:

Both Loving (the film) and Fisher [v. University of Texas at Austin] (the case) present their stories of individualized racial harm at the cost of avoiding meaningful recognition of systemic injustice. While in Loving this may seem positive due to the nature of the decision, and although in Fisher the court ultimately upheld the admissions policy, harmful ideological work is still being done to our socio-legal consciousness. In Fisher, the Court set injurious legal precedent in how it evaluates affirmative action programs—under intense scrutiny and with such little deference that fewer, if any, will pass constitutional muster. And because law is an embodiment of social practices interacting with cultural conceptions in noetic space, a trend in cinematic and legal narratives to shirk responsibility for holding oppressive institutions accountable only furthers a reciprocity with cultural ideology that moves the law away from helping those most vulnerable under it.

And yet, even as Loving (the film) is subject to critique as being limited, sentimental, and nostalgic, Doherty ultimately contends that the film has legal relevance given our fraught political landscape:

perhaps the cultural and legal imagining that needs to be done in the noetic space of 2017 is one grounded in the inspiring recognition of triumphant small-scale love. Maybe what Loving truly contributes to such a tumultuous cultural moment is the notion that not only must we continue to commit to fights we should not have to fight, but that if we want to take care of each other even when the law fails us, we must decide to keep loving.