In its opinion in CTIA - The Wireless Ass'n v. City of Berkeley, a panel of the Ninth Circuit rejected First Amendment and preemption challenges to an ordinance requiring retailers to provide notices to consumers about their cell phone purchase.  The notice, to be on a poster or handout, with the seal of the city, must read:

The City of Berkeley requires that you be provided the following notice:

To assure safety, the Federal Government requires that cell phones meet radiofrequency (RF) exposure guidelines. If you carry or use your phone in a pants or shirt pocket or tucked into a bra when the phone is ON and connected to a wireless network, you may exceed the federal guidelines for exposure to RF radiation. Refer to the instructions in your phone or user manual for information about how to use your phone safely.

As the notice implies, the FCC disclosures required to be included with the phone are similar if more extensive. 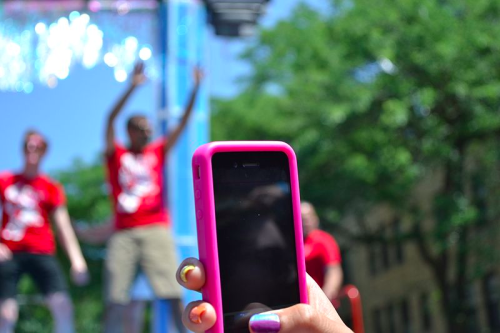 Affirming the district judge, the divided Ninth Circuit panel found that the required notice did not violate the First Amendment. As a compelled disclosure in a commercial context, the choice of standards was between the commercial speech test of Central Hudson Gas & Elec. Corp. v. Pub. Serv. Comm’n of New York (1980) or the more lenient test for disclosure of Zauderer v. Office of Disciplinary Counsel of the Supreme Court of Ohio (1985). Writing for the majority, Judge William Fletcher found that the Zauderer test was appropriate, despite the fact that the disclosure did not involve "consumer deception."  Judge Fletcher agreed with "sister circuits that under Zauderer the prevention of consumer deception is not the only governmental interest that may permissibly be furthered by compelled commercial speech," citing the D.C. Circuit's en banc opinion in American Meat Institute v. U.S. Department of Agriculture. Judge Fletcher's opinion reasoned that the Zauderer's language that the disclosure be “uncontroversial” should not be over-emphasized:

Applying the deferential Zauderer standard, the court again confronted whether the disclosure was "purely factual" as well as being reasonably related to a substantial governmental interest.  Judge Fletcher's opinion concluded the mandated notice was "literally true," based on FCC findings.  The court rejected CTIA's argument that while it might be "literally true," the statement was "inflammatory and misleading." Judge Fletcher analyzed the compelled notice sentence by sentence, finding it true. For example, CTIA objected to the phrase “RF radiation,” but  Judge Fletcher's opinion noted this is "precisely the phrase the FCC has used, beginning in 1996, to refer to radio-frequency emissions from cell phones," and that the city could not be faulted for using the technically correct term that the FCC itself uses.

It was on this point that the brief partial dissent by Judge Michelle Friedland differed.  For Judge Friedland, consumers would not read the disclosure "sentences in isolation the way the majority does."  She argues that taken as a whole,"the most natural reading of the disclosure warns that carrying a cell phone in one’s pocket is unsafe," and that "Berkeley has not attempted to argue, let alone to prove, that message is true."  She accuses the city of  "crying wolf" and advises the city if it "wants consumers to listen to its warnings, it should stay quiet until it is prepared to present evidence of a wolf."

In addition to the First Amendment claim, CTIA argued that the mandated disclosure was preempted by federal regulations.  The court noted procedural problems regarding when the argument was advanced.  Nevertheless, the court clearly concluded:

Berkeley’s compelled disclosure does no more than to alert consumers to the safety disclosures that the FCC requires, and to direct consumers to federally compelled instructions in their user manuals providing specific information about how to avoid excessive exposure. Far from conflicting with federal law and policy, the Berkeley ordinance complements and reinforces it.

But surely it is the First Amendment issues that are central to the case. The panel essentially divides on the limit to government mandated disclosures to consumers, an issue that vexed the DC Circuit not only in the American Meat Institute case mentioned above, but also in National Association of Manufacturers v. SEC (conflict minerals) and in R.J. Reynolds Tobacco Co. v. FDA (cigarette labeling), both of which held the labeling requirements violated the First Amendment.  One measure of the importance of the issue is the attorneys who argued CTIA in the Ninth Circuit: Theodore Olsen for the trade association of CTIA and Lawrence Lessig for the City of Berkeley.  The Ninth Circuit's majority opinion is careful and well-reasoned, but as the divided panel evinces, there are fundamental disputes about warning labels.