Judge John D. Bates (D.D.C.) ruled today that a student whose painting was displayed at the U.S. Capitol after winning an congressional art competition enjoyed no First Amendment right against the Architect of the Capitol when the Architect took the painting down based on its viewpoint.

Judge Bates said that the painting amounted to government speech, and that it was therefore not protected by the First Amendment.

The ruling is just the latest chapter in a dispute over the painting between a group of Republican lawmakers and law enforcement advocates, and the Congressional Black Caucus.

The case arose when high school student David Pulphus's painting was selected to represent Missouri's First Congressional District in the 2016 Congressional Art Competition. As a result, Pulphus's painting hung, along with other selected works, in the Cannon Tunnel in the U.S. Capitol complex. But this didn't sit well with some members of Congress, who saw the painting as anti-police. They took it upon themselves to remove the painting and deliver it to the office of Congressman William Clay, who represents the First District. After each removal, Clay, whose district includes Ferguson, then took it upon himself to return the painting to its place in the Cannon Tunnel. 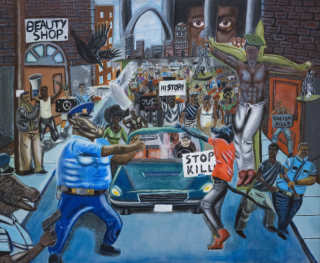 Eventually the Architect removed the painting, but did not explain exactly why. Clay and Pulphus then sued, arguing that the removal constituted viewpoint discrimination in a designated public forum and therefore violated free speech.

Judge Bates disagreed. Applying three factors from Walker v. Sons of Confederate Veterans and Pleasant Grove City v. Summum, Judge Bates said (1) that the "traditional use of the medium" was "inconclusive," but (2) that "[t]he government, then, is understood by the public as speaking through that exercise of choosing which works are displayed in the art competition," and (3) that the Architect "retains editorial control over the art submitted in the competition." He concluded that Pulphus's piece therefore amounted to government speech (and not private speech in a limited public forum), and therefore enjoyed no First Amendment protection.

Judge Bates also rejected the plaintiffs' vagueness challenge, writing that "[w]hen the government speaks, it is free to promulgate vague guidelines and apply them arbitrarily."