Recall the proceedings in Washington v. Trump in which a panel opinion upheld an injunction against the January 27, 2017 Executive Order by the President, now popularly known as Muslim Ban I.  Because the President withdrew the EO, replacing it with the March 6, 2017 Executive Order "Protecting The Nation From Foreign Terrorist Entry Into The United States" - - - enjoined today in Hawai'i v. Trump - - - proceedings in the Muslim Ban I became irrelevant and the United States dismissed the appeal.  Nevertheless, upon the request of a Ninth Circuit judge, a poll was taken to determine whether the Ninth Circuit should hear the case en banc and vacate the panel opinion.  Today, the order on this en banc request was rendered, and the "matter failed to receive a majority of the votes of the active
judges in favor of en banc reconsideration."

The order is accompanied by a paragraph concurring opining by Judge Reinhardt:

I concur in our court’s decision regarding President Trump’s first Executive Order – the ban on immigrants and visitors from seven Muslim countries. I also concur in our court’s determination to stand by that decision, despite the effort of a small number of our members to overturn or vacate it. Finally, I am proud to be a part of this court and a judicial system that is independent and courageous, and that vigorously protects the constitutional rights of all, regardless of the source of any efforts to weaken or diminish them. 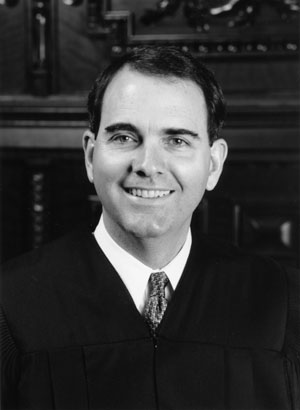 There is also a more than 20 page dissenting opinion authored by Judge Jay Bybee (pictured) and joined by Judges Kozinski, Callahan, Bea, and Ikuta.

The dissenting opinion of Judge Bybee, controversial in many quarters for his expansive views of Executive power, argues that the President's EO was "well within the powers of the presidency."  Essentially, the dissent argues that the panel opinion did not sufficiently defer to the Executive and Congressional power over immigration.  "The appropriate test for judging executive and congressional action affecting aliens who are outside our borders and seeking admission is set forth in Kleindienst v. Mandel, 408 U.S. 753 (1972)."  The dissent faults the panel opinion because it "missed" the Court's 2015 opinion in Kerry v. Din, "in which Din (a U.S. citizen) claimed that the government’s refusal to grant her Afghani husband a visa violated her own constitutional right to live with her husband. A plurality held that Din had no such constitutional right."

Judge Bybee's opinion seems to suggest that the panel misconstrued the law in service of the judge's own personal agendas, even as the opinion criticizes personal attacks on judges:

We are all acutely aware of the enormous controversy and chaos that attended the issuance of the Executive Order. People contested the extent of the national security interests at stake, and they debated the value that the Executive Order added to our security against the real suffering of potential emigres. As tempting as it is to use the judicial power to balance those competing interests as we see fit, we cannot let our personal inclinations get ahead of important, overarching principles about who gets to make decisions in our democracy. For better or worse, every four years we hold a contested presidential election. We have all found ourselves disappointed with the election results in one election cycle or another. But it is the best of American traditions that we also understand and respect the consequences of our elections. Even when we disagree with the judgment of the political branches—and perhaps especially when we disagree—we have to trust that the wisdom of the nation as a whole will prevail in the end.

Above all, in a democracy, we have the duty to preserve the liberty of the people by keeping the enormous powers of the national government separated. We are judges, not Platonic Guardians. It is our duty to say what the law is, and the meta-source of our law, the U.S. Constitution, commits the power to make foreign policy, including the decisions to permit or forbid entry into the United States, to the President and Congress. We will yet regret not having taken this case en banc to keep those lines of authority straight.

Finally, I wish to comment on the public discourse that has surrounded these proceedings. The panel addressed the government’s request for a stay under the worst conditions imaginable, including extraordinarily compressed briefing and argument schedules and the most intense public scrutiny of our court that I can remember. Even as I dissent from our decision not to vacate the panel’s flawed opinion, I have the greatest respect for my colleagues. The personal attacks on the distinguished district judge and our colleagues were out of all bounds of civic and persuasive discourse—particularly when they came from the parties. It does no credit to the arguments of the parties to impugn the motives or the competence of the members of this court; ad hominem attacks are not a substitute for effective advocacy. Such personal attacks treat the court as though it were merely a political forum in which bargaining, compromise, and even intimidation are acceptable principles. The courts of law must be more than that, or we are not governed by law at all.

Judge Bybee doesn't seem to primarily be faulting the panel for "missing" Don, but rather for creating a rule under which the EO was not subject to the standard of Mandel (and Din)—a rule that Judge Bybee argues conflicts directly with the Supreme Courts decision on Fiallo v Bell: "
The panel’s holding that “exercises of policymaking authority at the highest levels of the political branches are plainly not subject to the Mandel standard,” [Panel opinion], is simply irreconcilable with the Supreme Court’s holding that it could “see no reason to review the broad congressional policy choice at issue [there] under a more exacting standard than was applied in Kleindienst v. Mandel,” Fiallo, 430 U.S. at 795."