In International Refugee Assistance Project (IRAP) v. Trump, Maryland District Judge Theodore Chuang issued a nationwide injunction against the President's March 6, 2017 Executive Order "Protecting The Nation From Foreign Terrorist Entry Into The United States" (now numbered EO 13,780), which is colloquially known as the revised travel ban or "Muslim Ban 2.0."   The 43 page opinion concludes that the Plaintiffs have a likelihood of success on their claims that the EO violates the Immigration and Nationality Act and violates the Establishment Clause.  [Note: Judge Chuang construed the motion for TRO/PI as a motion for a preliminary injunction and issued an injunction.] It closely follows on the TRO issued in Hawai'i v. Trump.

On the issue of standing, Judge Chuang first finds that several of the individual plaintiffs have standing to challenge the EO on statutory grounds, meeting both Article III standing and being within the zone of interests of the statute.  Likewise, several plaintiffs have standing to challenge on the EO on Establishment Clause grounds given their personal injury on having family members who are directly and adversely affected by the ban. 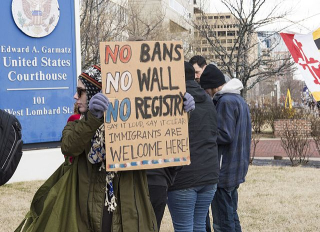 Judge Chuang's opinion devotes substantial attention to the Immigration and Nationality Act claim, which has been raised in most of the complaints challenging this EO and its predecessor, but has not been the basis for a judicial restraining order.  Here, Judge Chuang concludes that the general power given to the President by 8 U.S.C. §1182(f) to "suspend the entry of all aliens or any class of aliens" is not exempt from the provision of 8 U.S.C. §1152(a) which bars discrimination in the issuance of immigrant visas.  Importantly, the exceptions listed in the non-discrimination provision of §1152(a) do not include §1182(f):

Because the enumerated exceptions illustrate that Congress “knows how to expand ‘the jurisdictional reach of a statute,793 the absence of any reference to § 1182(1) among these exceptions provides strong evidence that Congress did not intend for §1182(1) to be exempt from the anti-discrimination provision of §1152(a).

[citation omitted].  Thus, Judge Chuang held that the plaintiffs have a likelihood to succeed on their statutory claim.

On the Establishments Clause claim, Judge Chuang, like other judges, looked to McCreary County v. ACLU of Kentucky (2005), for an interpretation of the first prong of the Lemon test, Lemon v. Kurtzman (1971), requiring an government act to have a secular purpose in order to be constitutional. Noting that finding of purpose is a common task for the courts, Judge Chuang discussed the specific statements in the record "directly establishing that Trump intended to effectuate a partial Muslim ban by banning entry by citizens of specific predominantly Muslim countries deemed to be dangerous, as a means to avoid, for political reasons, an action explicitly directed at Muslims."  These statements included the by now familiar statements of candidate Trump and of former-Mayor Guiliani relating to the first EO.  Additionally, Judge Chuang found that the despite the changes in the second EO, "the history of public statements continues to provide a convincing case that the purpose of the Second Executive Order remains the realization of the long-envisioned Muslim ban," quoting statements by Senior Policy Advisor to the President Stephen Miller and White House Press Secretary Sean Spicer.

Judge Chuang rejected the Government's argument that such statements should not be considered because they were made outside the formal government decision-making process. Instead, "all of the public statements at issue here are fairly attributable to President Trump."

Moreover, Judge Huang also looked to the language of the second EO itself.  He rejected the Government's argument that the second EO's articulation of a national security purpose essentially saves the EO.  However, while there should ordinarily be deference to national security, Judge Chuang found that in this "highly unique case," the record provides "strong indications that the national security interest is not the primary purpose of the EO.

Judge Chuang also rejected the Government's argument that deference is warranted.  This deference argument was made in a dissenting opinion by Judge Jay Bybee from the Ninth Circuit's denial of en banc review in Washington v. Trump.  For Judge Chuang, the deferential standard of Kleindienst v. Mandel (1972), is most "typically applied when a court is asked to review an executive officer's decision to deny a visa" as in Kerry v. Din (2015). The Mandel test does not apply to the promulgation of sweeping immigration policy. Instead, even when exercising their immigration powers, the political branches must choose constitutional permissible means of implementing that power.  It is the courts' duty to determine those constitutional boundaries.

Thus, Judge Chuang issued a nationwide injunction against §2(c) of the Executive Order, independent of the injunction earlier that same day of §2, as well as §6, in Hawaii v. Trump.

[image: Photo by Bruce Emmerling of protest of first EO outside courthouse in Baltimore via; note that Judge Chuang does not sit in Baltimore].