Reversing the district judge, the D.C. Circuit's opinion in United States v. Bronstein upheld the prohibition of certain speech in the United States Supreme Court against a challenge that it was unconstitutionally vague and thus violated the Fifth Amendment's Due Process Clause.

It is unlawful to discharge a firearm, firework or explosive, set fire to a combustible, make a harangue or oration, or utter loud, threatening, or abusive language in the Supreme Court Building or grounds.

The district judge had found that “harangues” and “orations” are terms that “cannot be determined without reference to subjective perceptions and individual sensitivities," and thus the statute was not sufficiently precise. The unanimous D.C. Circuit panel found that the statute's

Moreover, the court found that "while “harangue” and “oration” may not roll off the average person’s tongue today," this "does not alter their possession of a settled meaning around public speeches."  The general sense is "making a speech to a public assembly," and based on the title of the statute, the sense is clear that this pertains to "noises" intended to "disrupt the court's operations." 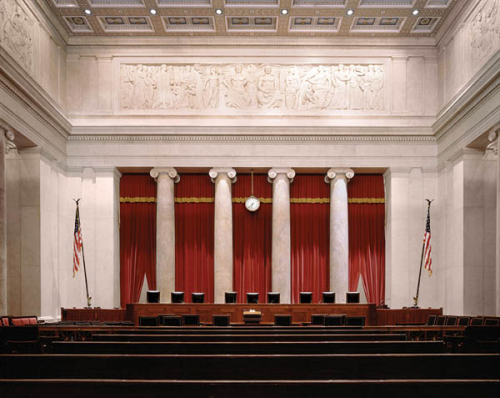 In its application, the opinion by Judge Janice Rogers Brown somewhat oddly includes a cinematic reference:

Turning to the facts here, a person of ordinary intelligence could read this law and understand that, as a member of the Supreme Court’s oral argument audience, making disruptive public speeches is clearly proscribed behavior—even in staccato bursts, seriatim. And yet, in a coordinated fashion, each Appellee is alleged to have directed a variation of the same message to the Justices of the Supreme Court and the assembled audience. Their coordinated standing, facing the bench, and messaging indicate the Appellees were addressing the Court and gallery. Cf. MY COUSIN VINNY (20th Century Fox 1992) (Judge Chamberlain Haller: “Don’t talk to me sitting in that chair! . . . When you’re addressing this court, you’ll rise and speak to me in a clear, intelligible voice.”). Viewed objectively, these alleged acts could easily be considered speeches to a public assembly that tended to disrupt the Court’s operations—conduct covered by § 6134’s prohibition of “make a harangue or oration.”

Earlier in the Bronstein opinion, joined by Judge Srinivasan and Senior Judge Williams, Judge Brown does provide more of the substance of the speeches which included objections to Citizens United and the legal construction of money as speech.  Judge Brown notes that the protest occurred on "April Fools Day of 2015;" the protest group describes the timing as being on the eve of the one year anniversary of McCutcheon v. FEC. (There were no arguments on April 2, the actual anniversary, or the day after).