The Ninth Circuit issued an Order staying the en banc consideration of Washington v. Trump based on the Department of Justice's representation that “the President intends to issue a new Executive Order” and has urging the Court to “hold its consideration of the case until the President issues the new Order.”  Recall that the Executive Order at issue is Protecting the Nation From Foreign Terrorist Entry Into the United States, commonly known as the "Muslim Ban" or "Travel Ban." (There have reportedly been conflicting versions of the EO). Recall also that the Ninth Circuit panel had issued an opinion in an emergency appeal denying a stay of the injunction from Washington District Judge Robarts in Washington (and Minnesota) v. Trump.

A week ago, the court had instructed the parties to file simultaneous briefs regarding en banc review, in response to a sua sponte request (by a judge who remains anonymous) that a vote be taken as to whether panel opinion should be reconsidered en banc.

The DOJ Brief on behalf of the United States argued that while the panel opinion "readily meets the normal standards for rehearing en banc,"

Nevertheless, the United States does not seek en banc review of the merits of the panel’s ruling. Rather than continuing this litigation, the President intends in the near   future to rescind the Order and replace it with a new, substantially revised Executive Order   to eliminate what the panel erroneously thought were constitutional concerns. Cf. Op. 24   (declining to narrow the district court’s overbroad injunction because “[t]he political   branches are far better equipped to make appropriate distinctions”). In so doing, the   President will clear the way for immediately protecting the country rather than pursuing   further, potentially time-consuming litigation. Under the unusual circumstances presented   here—including the extraordinarily expedited proceedings and limited briefing to the   panel, the complexity and constitutional magnitude of the issues, the Court’s sua sponte   consideration of rehearing en banc, and respect for the President’s constitutional   responsibilities—the government respectfully submits that the most appropriate course   would be for the Court to hold its consideration of the case until the President issues the  new Order and then vacate the panel’s preliminary decision. To facilitate that disposition,   the government will notify the Court of the new Order as soon as it is issued. 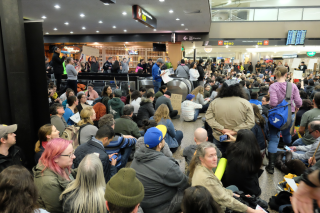 "Sea-Tac Airport protest against immigration ban. Sit-in blocking arrival gates until 12 detainees at Sea-Tac are released"
by Dennis Bratland via

For his part, the President of the United States in a press conference, addressed the issue by claiming that a "bad court" from a circuit "in chaos" and "frankly in turmoil" and that issued a "bad decision." He insisted that the roll out of the Executive Order was "perfect."  But although he did say "we are appealing that," he also said there would be a "new order" "sometime next week, toward the beginning or middle at the latest part. …….."

As far as the new order, the new order is going to be very much tailored to the what I consider to be a very bad decision.
But we can tailor the order to that decision and get just about everything, in some ways, more. But we’re tailoring it now to the decision, we have some of the best lawyers in the country working on it.
And the new executive order, is being tailored to the decision we got down from the court. OK?