A habeas petition filed in Ramirez Medina v. US Department of Homeland Security avers constitutional violations of procedural due process and substantive due process under the Fifth Amendment as well as unlawful seizure under the Fourth Amendment.

The petition comes amidst reported "raids" by Immigration and Customs Enforcement (ICE) across the country.  Ramirez, who is a 23 year old non-citizen, had been granted employment authorization under the Deferred Action for Childhood Arrivals (DACA) program in 2014, and it was renewed in 2016.  According to the allegations in the petition, he was not the target of ICE agents, but encountered them when the agents arrested his father.  When the ICE agents asked him if he was "legally here," Mr. Ramirez responded that was, relying on his employment authorization under DACA.  Nevertheless, as the petition alleges

ICE agents then took Mr. Ramirez to a processing center in Seattle, Washington. When he again informed them about his work permit, one of the ICE agents stated: “It doesn’t matter, because you weren’t born in this country.” At this point, the ICE agents had Mr. Ramirez’s wallet, which contained his work permit, which clearly identified him as a DACA recipient with a “C-33” code, which reflects a work authorization issued pursuant to DACA. Despite this fact, Mr. Ramirez was questioned further, fingerprinted, booked, and taken to a detention center in Tacoma, Washington. 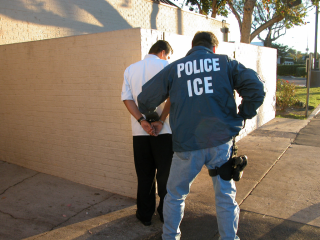 The first count argues that the detention (apparently still continuing) is a violation of procedural due process rights.  Ramirez alleges an interest in his liberty, but also alleges a property interest by virtue of the promises made in the DACA program.  Thus, the Matthews v. Eldridge balancing test should apply, affording Ramirez both notice and hearing, as well as application of the extant policies - - - which provide he should not be detained - - - given his DACA status.  The second count of substantive due process alleges that Ramirez's liberty is a fundamental interest of which he has been wrongly deprived.  And lastly, the Fourth Amendment claim alleges an absence of probable cause for his arrest.

The Western District of Washington Magistrate has set a hearing for the morning of Friday, February 17, with briefs due the previous day.  The Magistrate has ordered the brief of DHS to answer, with an opportunity for Ramirez to respond, to the following questions: