In a brief Order in IMBD v. Becerra, federal district judge Vince Chhabria enjoined California AB 1687, added as §1798.83.5, stating that "it's difficult to imagine how AB 1687 could not violate the First Amendment."

The statute provides that a commercial online entertainment employment service provider, such as IMBD,

that enters into a contractual agreement to provide employment services to an individual for a subscription payment shall not, upon request by the subscriber, do either of the following:

The purpose stated in the statute is to "ensure that information obtained on an Internet Web site regarding an individual’s age will not be used in furtherance of employment or age discrimination."
Judge Chhabria held that the statute which prohibits "IMDb from publishing factual information (information about the ages of people in the entertainment industry) on its website for public consumption" is clearly a content regulation.  Thus, "the burden is on the government to show that the restriction is "actually necessary" to serve a compelling government interest." 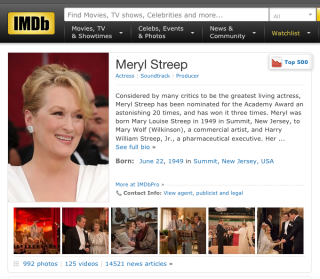 In sum, the judge rules that age discrimination in Hollywood may be a problem, but governmental efforts to conceal information about actors' ages is not the solution.