There are at least two letters circulating amongst law professors regarding Neil Gorsuch's nomination to Associate Justice on the United States Supreme Court.

The opposition letter, available here, stresses Gorsuch's "judicial philosophy," as, "in his own words" "focusing backward, not forward.”  With references to specific cases, it argues that Gursuch lacks "the necessary commitment to independence to hold government officials accountable," that he will "undermine reproductive rights," that he repeatedly "sides with big corporations over workers' rights," that he has "undermined federal laws meant to protect persons with disabilities," and that he will hamper agencies' ability to enforce Congressional laws meant to protect environmental and health safety.

The supporting letter, available here, stresses Gorsuch's qualifications, his "fairness and integrity, his analytical rigor, and his persuasive writing."  It describes him as a  "scholar and a teacher" whose views fall well within the bounds of modern jurisprudence.

In closing, we note how little good comes from playing politics with judicial nominations. In his 2016 Year End Report, Chief Justice Roberts asked “why any lawyer would want a job that requires long hours, exacting skill, and intense devotion – while promising high stress, solitary confinement, and guaranteed criticism.” The political gauntlet that judicial nominations have become – highlighted most recently by the Senate’s outright refusal to consider the nomination of Judge Merrick Garland, also a brilliant judge eminently qualified for the Supreme Court – underscores this concern. Nominees expose themselves and their families to the withering glare of the modern media cycle and to political fortunes unconnected to their merit for the position. Senators of both parties employ arguments to delay and block nominees of the other party’s President, only to denounce these tactics when political fortunes are reversed. Litigants who depend on the efficient functioning of the courts to see justice done ultimately pay the price.

Law Professors wishing to sign one or the other of the letters should do so quickly. 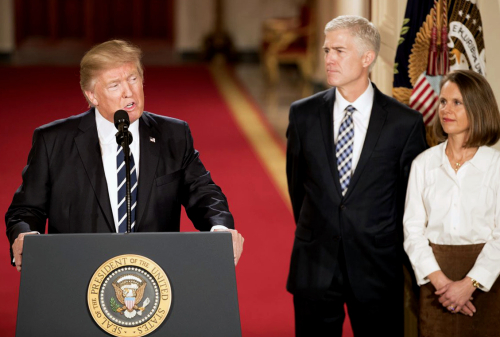 Is Gorsuch a secret liberal? Trump, GOP have reason to wonder.

Warren was the governor of California who participated in the detention of Japanese Americans during World War II. Brennan was appointed to New Jersey Supreme Court by Republican Governor Alfred Driscoll. Brennan was not a liberal on New Jersey's highest court.

The first point is that once on the Supreme Court, justices can go on their own path. The second point is that judges with slim records, like Judge Gorsuch, are not easy to predict.
Liberal Signs

Gorsuch lives in the ultra-liberal college town of Boulder, Colorado. He also teaches at the University of Colorado's law school, also a progressive bastion, and is supported in his quest for the Supreme Court by most of the faculty and students there.

Mike Orr, a spokesman for the Episcopal Church in Colorado, described Gorsuch's church, as a congregation that "does a lot of social justice and advocacy." He said, "It's a healthy and vibrant congregation. It's very diverse in its congregants as well as its ministry."

The first word that St. John's uses to describe itself on its website and Facebook page is "inclusive," and the church is led by a female rector. On its website, the church encourages members to write letters to Congress asking that they combat climate change.

Judge Gorsuch sided with an Albuquerque middle schooler who was strip-searched by his school, dissenting while his colleagues ruled that the school, police officer and other employees were immune from lawsuits. Judge Gorsuch cited in a brief, colorful dissent, "Oliver Twist," in which a judge admonishes Mr. Micawber that the law thinks a man should control his wife. In the novel, Micawber responds: "If the law thinks that, then the law is a ass, a idiot."

"Often enough the law can be 'a ass - a idiot,' Charles Dickens, Oliver Twist 520 (Dodd, Mead & Co. 1941) (1838) - and there is little we judges can do about it, for it is (or should be) emphatically our job to apply, not rewrite, the law enacted by the people's representatives. Indeed, a judge who likes every result he reaches is very likely a bad judge, reaching for results he prefers rather than those the law compels.

"So it is I admire my colleagues today, for no doubt they reach a result they dislike but believe the law demands - and in that I see the best of our profession and much to admire. It's only that, in this particular case, I don't believe the law happens to be quite as much of a ass as they do. I respectfully dissent."

Judge Gorsuch's opinion in this case was published six months ago. He does not sound very conservative in this dissent.

Judge Gorsuch wrote an opinion upholding a Colorado clean energy program against a challenge alleging it would hurt coal producers from out of state. Colorado law requires electricity generators to ensure that 20 percent of the electricity they sell to Colorado consumers comes from renewable sources. Gorsuch upheld the liberal legislation of the Colorado legislature that was challenged by the Energy and Environment Legal Institute, a conservative, anti-environment organization.

Judge Gorsuch does not fit the mold of a rock-ribbed conservative. He is a smart, free-thinking, literary, independent who will be a good, and unpredictable justice. In some cases he will be liberal, some libertarian and in others conservative. But he is a fair man with a good sense of justice, just what we need on the Supreme Court.

Joel D. Joseph is the author of Black Mondays: Worst Decisions of the Supreme Court (4th Edition, 2014), with a foreword by Justice Thurgood Marshall, and Inequality in America: 10 Causes and 10 Cures (2016). He earned his JD from Georgetown University.