In its opinion in Doe v. Snyder, the Sixth Circuit has concluded that the 2006 and 2011 amendments of Michigan's Sexual Offender Registration Act (SORA), as retroactively applied to plaintiffs violate the Ex Post Facto Clause, United States Constitution, Art. I §10, cl. 1.

The Ex Post Facto Clause only applies to retroactive punishment, and the opinion notes that under the United States Supreme Court's Smith v. Doe (2003), upholding Alaska's SORA, the test is "quite fixed": "an ostensibly civil and regulatory law, such as SORA, does not violate the Ex Post Facto clause unless the plaintiff can show 'by the clearest proof' that 'what has been denominated a civil remedy' is, in fact, 'a criminal penalty.'"

Judge Alice Batchelder, writing for the unanimous panel, applied the Smith v. Doe test for determining whether a statute that does not have a punitive intent nevertheless has actual punitive effects, including five factors: 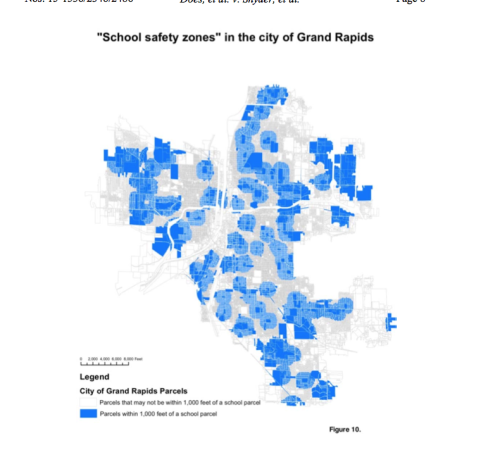 In considering the history factor, the court relied on an amicus brief from law professors and discussed the relationship of SORA to ancient punishments of banishment.  To this end, the court reproduced a map for Grand Rapids Michigan, illustrating (in blue) where persons under SORA were now prohibited from living, working, or traveling.

The map also figured into the court's conclusions regarding the other factors, including the rational relationship.  Indeed, the court found that SORA may actually increase recidivism rates and that "Tellingly, nothing the parties have pointed to in the record suggests that the residential restrictions have any beneficial effect on recidivism rates."

There were other constitutional challenges to SORA, but the court seemingly found the Ex Post Facto argument most determinative. The court's originalist theoretical perspective on the Ex Post Facto Clause is  striking:

Indeed, the fact that sex offenders are so widely feared and disdained by the general public implicates the core counter- majoritarian principle embodied in the Ex Post Facto clause. As the founders rightly perceived, as dangerous as it may be not to punish someone, it is far more dangerous to permit the government under guise of civil regulation to punish people without prior notice. Such lawmaking has “been, in all ages, [a] favorite and most formidable instrument[] of tyranny.” The Federalist No. 84, supra at 444 (Alexander Hamilton). It is, as Justice Chase argued, incompatible with both the words of the Constitution and the underlying first principles of “our free republican governments.” Calder, 3 U.S. at 388–89; accord The Federalist No. 44, supra at 232 (James Madison) (“[E]x post facto laws . . . are contrary to the first principles of the social compact, and to every principle of sound legislation.”).

Thus, while the court acknowledged that the Smith v. Doe test was a difficult one to meet, "difficult is not the same as impossible" and Smith v. Doe should not "be understood to write a blank check to states to do whatever they please in this arena." Most likely, Michigan will disagree and seek United States Supreme Court review to ask the Court to clarify its understanding.