Recall that in Reed, Justice Kagan separately concurred in the unanimous decision to warn that strict scrutiny was not always appropriate and that "we may do well to relax our guard so that 'entirely reasonable' laws imperiled by strict scrutiny can survive."  Here, it seems that the Ninth Circuit panel has taken that advice, applying the relaxed standard of time, place, and manner doctrine rather than content-discrimination meriting strict scrutiny. 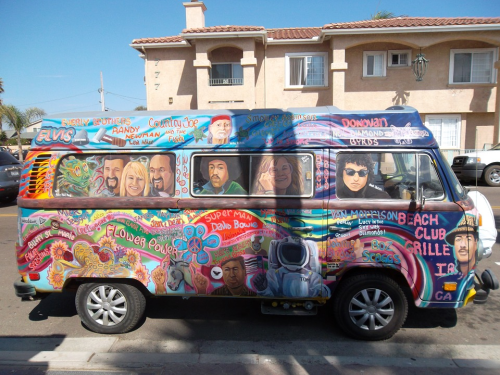 Image via
[It seems that this van would not violate the L.A. ordinances]

The L.A. ordinances are directed at "advertising signs" on vehicles or attached to vehicles.  Signs on vehicles - - - painted or permanently affixed - - - are allowed as long as they do not extend beyond the vehicle or make the vehicle unsafe.  Signs that attached to non-motorized vehicles, such as those on standalone trailers, are prohibited from parking on city streets.

Judge Mary Murguia, writing for the unanimous panel, concluded that the ordinances applicability to "advertising" did not render the ordinances content-based.  The opinion relied on a state case that construed advertising as displaying any message to the public rather than the content of that message and upheld an ordinance as applied to a nonprofit organization protesting animal cruelty.  Moreover,

The Supreme Court’s recent decision in Reed does not alter our conclusion. Unlike Reed, the mobile billboard ordinances do not single out a specific subject matter for differential treatment, nor is any kind of mobile billboard exempted from regulation based on its content. There has been no suggestion that the ordinances apply differently to Lone Star Security’s political endorsements than to its commercial promotional campaigns, for example. Rather, an officer seeking to enforce the non-motorized billboard ordinances must decide only whether an offending vehicle constitutes a prohibited “advertising display” because its primary purpose is to display messages, as opposed to transporting passengers or carrying cargo. . . . In the case of the motorized billboard ordinance, an enforcing officer would simply need to distinguish between signs that are permanent or non-permanent, and larger or smaller than the vehicles to which the signs are affixed to determine whether the vehicle violates the ordinance.

[ellipses added; citations omitted].  Once having determined the correct standard was not strict scrutiny, the panel easily found that the ordinances survived review.

The parties do not dispute that the cities’ stated interests in traffic control, public safety, and aesthetics are sufficiently weighty to justify content-neutral, time, place, or manner restrictions on speech, nor could they.

Appellants are free to disseminate their messages through myriad other channels, such as stationary billboards, bus benches, flyers, newspapers, or handbills. Appellants may also paint signs on vehicles and attach decals or bumper stickers. Although mobile billboards are a unique mode of communication, nothing in the record suggests that Appellants’ overall “ability to communicate effectively is threatened.”

This case is about ugly signs on vehicles, and no doubt I would not want these vehicles and their signs parked in front of my house. But under the ordinances at issue, a car with equally ugly decals—including a decal of a vehicle with an ugly sign—would not “go to jail,” but instead treat my curb like the upper left corner of a Monopoly board.

If “aesthetics” are to play a part in speech restriction, then such aesthetics should apply equally, decal or sign. Yet under Taxpayers for Vincent, the Court rejected the very point that I now make. See 466 U.S. 810–12 (rejecting the Ninth Circuit’s holding that “a prohibition against the use of unattractive signs cannot be justified on esthetic grounds if it fails to apply to all equally unattractive signs wherever they might be located”). I think our court was right then, and the Supreme Court should reconsider this portion of Taxpayers for Vincent. As it currently stands, politicians can use Taxpayers for Vincent and its beholderish “aesthetics” to covertly ensure homogeneous thinking and political discourse. That is a dimension we should avoid. See The Twilight Zone: Eye of the Beholder (CBS television broadcast Nov. 11, 1960).

Judge Owens was not part of the Ninth Circuit panel that the Court reversed, although the third member of this Ninth Circuit panel - - - Judge Stephen Reinhardt - - - was.  Judge Reinhardt, born in 1931, may also have seen the original episode of The Twilight Zone to which Judge Owens, born more than a decade after its original airing, refers.