In its extensive opinion in North Carolina State Conference of the NAACP v. McCrory, the Fourth Circuit has permanently enjoined the implementation of North Carolina SL 2013-381’s photo ID requirement and changes to early voting, same-day registration, out-of-precinct voting, and preregistration.  The Voter Information Verification Act, the Fourth Circuit concluded, made a racial classification although it seemed neutral, reasoning that

on the day after the Supreme Court issued Shelby County v. Holder (2013), eliminating preclearance obligations, a leader of the party that newly dominated the legislature (and the party that rarely enjoyed African American support) announced an intention to enact what he characterized as an “omnibus” election law. Before enacting that law, the legislature requested data on the use, by race, of a number of voting practices. Upon receipt of the race data, the General Assembly enacted legislation that restricted voting and registration in five different ways, all of which disproportionately affected African Americans.

In response to claims that intentional racial discrimination animated its action, the State offered only meager justifications. Although the new provisions target African Americans with almost surgical precision, they constitute inapt remedies for the problems assertedly justifying them and, in fact, impose cures for problems that did not exist. Thus the asserted justifications cannot and do not conceal the State’s true motivation.

The Fourth Circuit concluded that the North Carolina Voter Information Verification Act violated both the Fourteenth Amendment's Equal Protection Clause and §2 of the Voting Rights Act.  For both, the hurdle was finding the legislature acted with racially discriminatory intent.  Most of the opinion is devoted to this discussion. The Fourth Circuit reversed the district judge on this basis, writing that the judge seemed "to have missed the forest in carefully surveying the many trees," and ignoring "critical facts bearing on legislative intent, including the inextricable link between race and politics in North Carolina."

In the Equal Protection analysis, the Fourth Circuit applied the well-established requirement of racial intent (as well as effects) from Washington v. Davis. In considering whether the seemingly-neutral voting requirements were enacted “because of,” and not “in spite of,” their discriminatory effect, citing Pers. Adm’r of Mass. v. Feeney (1979), the Fourth Circuit discussed the factors of Village of Arlington Heights v. Metropolitan Housing Development Corp. (1977):

In Arlington Heights, the Court set forth a nonexhaustive list of factors to consider in making this sensitive inquiry. These include: “[t]he historical background of the [challenged] decision”; “[t]he specific sequence of events leading up to the challenged decision”; “[d]epartures from normal procedural sequence”; the legislative history of the decision; and of course, the disproportionate “impact of the official action -- whether it bears more heavily on one race than another.”

The Fourth Circuit then discussed these factors individually.  Importantly, on the sequence of events, the opinion stated that

the General Assembly’s eagerness to, at the historic moment of Shelby County’s issuance, rush through the legislative process the most restrictive voting law North Carolina has seen since the era of Jim Crow -- bespeaks a certain purpose. Although this factor, as with the other Arlington Heights factors, is not dispositive on its own, it provides another compelling piece of the puzzle of the General Assembly’s motivation.

But, as the Fourth Circuit noted - - - and for which it faulted the district court - - - the factors should not be considered in isolation. Instead, Arlington Heights requires a totality of circumstances analysis.

The Fourth Circuit having found that race was a factor in the enactment of the Voter Information Verification Act (emphasis in original), the burden shifted to the state to demonstrate that the law would have been enacted without this factor, by assessing "whether a law would have been enacted without a racially discriminatory motive by considering the substantiality of the state’s proffered non-racial interest and how well the law furthers that interest." The Fourth Circuit faulted the district judge for conducting this analysis through a "rational-basis-like lens," when such deference is "wholly inappropriate."

The Fourth Circuit discussed each challenged provision of the Voter Information Verification Act. On the voter identification requirement specifically, the Fourth Circuit found Crawford largely inapplicable given that Crawford did not involve even an allegation of intentional race discrimination. It found that while preventing voter fraud is a valid government interest, the means chosen are both too narrow and too broad.  Similarly, the Fourth Circuit found that the other provisions could not satisfy the standard:

In sum, the array of electoral “reforms” the General Assembly pursued in SL 2013-381 were not tailored to achieve its purported justifications, a number of which were in all events insubstantial. In many ways, the challenged provisions in SL 2013-381 constitute solutions in search of a problem. The only clear factor linking these various “reforms” is their impact on African American voters. The record thus makes obvious that the “problem” the majority in the General Assembly sought to remedy was emerging support for the minority party. Identifying and restricting the ways African Americans vote was an easy and effective way to do so.

The Fourth Circuit panel was unanimous to this point, but divided as to the relief.  Judge Diana Gribbon Motz, wrote the panel's opinion except to Part V.B., from which she dissented.  Her dissent is from a permanent injunction as to the photo identification requirement given that the North Carolina legislature passed a "reasonable impediment exception" from that requirement.  She would"only temporarily enjoin the photo ID requirement and remand the case to the district court to determine if, in practice, the exception fully remedies the discriminatory requirement or if a permanent injunction is necessary."

The dissenting point is a small one.  The Fourth Circuit panel unanimously held that the North Carolina Voter Information Verification Act violates both the Equal Protection Clause and §2 of the Voting Rights Act. 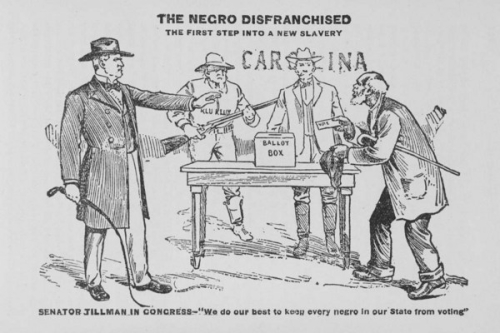 Some sorely-needed good news! (And LEDP here we come!)