In a just-published article, Black Lives Matter and Respectability Politics in Local News Accounts of Officer-Involved Civilian Deaths: An Early Empirical Assessment, 2016 Wisconsin Law Review 541, ConLawProf Osagie K. Obasogie (pictured below) and UC Hastings law student Zachary Newman present a compelling discussion of how news media - - - and by extension the general public - - - engage in the politics of respectability with regard to allegations of police misconduct, focusing on the conduct or character of the victim. 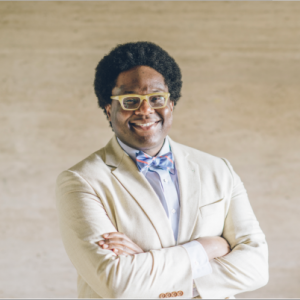 The authors argue that although " sustained media attention to Black Lives Matter may lead some to conclude that journalists have become more sensitive to how respectability politics can lead to inaccurate reporting and encourage more balanced descriptions of these events, our qualitative assessment of the selected data suggests that journalists’ reporting of these incidents continues to reflect a troubling respectability politics that minimizes the lives lost and overstates the legitimacy of police use of deadly force."

In looking at news reports from 2013 until July 2015, the authors conclude that

overall, as a qualitative matter, there is a notable discursive consistency across pre– and post–Black Lives Matter reporting on officer-involved killings, suggesting that the movement’s concerns over race and respectability are not reflected in journalists’ accounts. This overall finding is empirically supported by three persistent themes throughout the data: (1) a strong commitment to colorblindness in discussing the race of the parties involved, (2) the dominance of the police perspective in reporting these incidents, and (3) continued use of criminalizing language unrelated to the incident itself to characterize the victim’s respectability.

The authors insights could be extended to more recent events, including those of this past week, which will be sure to still be on the minds of law students in our classes and  this article could be a great introductory reading for 1L students.

Additionally, more must-read discussions of respectability politics including the events of the last week is over at Race and the Law Prof Blog, including Atiba Ellis's, On Respectability, the Dallas Shootings, #BlackLivesMatter, and Reasoned Discourse which links to that blog's online symposium on Respectability Politics.

Another clever propaganda piece, disguised as research. As I have said, Con Law Professors need to get out in the real world occasionally and see what it is like. I suspect that Professor Obasogie's Con Law I class begins by studying the 14th Amendment rather than the Articles of Confederation or the Constitutional Convention.

In addition to being an elected Circuit Judge for 18 years, in the busiest [or possibly the 2nd busiest circuit (cases per judge)] my additionally responsibility was to be the Director of the 13th Circuit Police, a 30+ person police force which patrolled Mobile Government Plaza, Mobile Community Corrections Center, Strickland Youth Center, and the Bay Haas Building. Additionally, we had a three person warrant team that arrest felons, some very violent, usually at sunrise. I supervised all aspects of this force and took any complaints regard any matter you can imagine.

I once had to fire my police chief because I received a report that he had punched a restrained arrestee in the stomach, while the man’s hands were cuffed behind him. The report was substantiated by enough credible witnesses that had the man who was punched been willing, I would have walked him over to file criminal charges. Five time felons usually don’t want to initiate criminal complaints. I also fired a few officers for being rude to visitors being screened for contraband at our main screening post, even though probably half of our visitors had criminal records. As I told them, all it takes is to smart off to the wrong person then we are all over the media, Face Book, etc. Then all the goodwill we have is gone. So I know that you have to supervise a police department, especially with the officers in their 20’s, that are a little more aggressive.

I am also aware from my own experience, my research, as well as personally apprehending two felons that generally young Black male resist arrest and are disrespectful of authority figures. I have had my courtroom literally torn up by a 20-year old Black defendant, who was getting a real break, but didn’t like some of the terms of probation. I asked him, “I get the feeling that you are not going to report to the probation officer. Are you going to report?” In return, I got: “f__ you” back and as I ordered him into custody it took a total of seven guards, probation and police officers to get him back to lock up. Several officers were bloody, a table weighing 150 pounds was overturned. Has that been on the street he may have been dead and I am not sure I would have blamed anyone.

This author cites colorblindness. There sure is a lot of that especially when there are White crime victims and Black perpetrators. I have seen or watch hundreds of stories, many where the perpetrator has not been arrested where his (most are male) is never stated. If you want to find someone a complete description is needed. Often, television nee will have a photo of the suspect with his name. If you are listening by simulcast, you will never hear his race.

As to the victim of a police shooting being “smeared” by the media with prior arrest or convictions that may or may not be highly relevant to why the officer acted in a certain way. If an officer stops a car for a traffic infraction and the driver happens to have a license and the officer calls it and determines that the car is stolen, and the suspect has had a number of arrests for assault, a couple of convictions, an illegal firearms conviction, and five resisting arrest convictions, he will treat that suspect a lot differently than he would anyone else.

Often the media will run the shooting victim’s record to be sensational but often it is only after the relatives of the dead victim say “he was a good boy”, “he was never in trouble”, “he would not hurt a fly” and his criminal record reveals all of those statements to be false.

In sentencing hearings I heard that all the time. I remember a case where a young Black male kidnapped, raped, and brutally assaulted a White co-ed at a local college. He was on probation for another crime of violence when this occurred. Several close relatives started all of that with me and I simply ask them how close they were to the defendant. “Like a mother” they replied. “Why don’t you know about his convictions for…..?” Then I rattled of twelve convictions for violent offenses. The answer was “He was forced to plead guilty” or “He was set up”.

Academic articles are wonderful to me. I read them as a judge (although most judge think they are a waste of time) and read more while retired. However, Osagie K. Obasogie article is not only wrong but contributing to the violence that is growing.

Every individual whether you are, White, Black, Asian, Hispanic or Other that has pushed, mistakenly believed, or humored the Black Lives Matter lie are enablers to the violence of the past week. You have blood on your hands. The blood of those police officers’ who were murder in Dallas and elsewhere by terrorists and terror groups emboldened by the lie that the Police are killing Black males for absolutely no reason. The Black Lives Matter narrative is a lie, is not true, is a fraud and we must confront this lie every time we hear it, whether it comes from the President of the United States or from the President of the Jr. League.

I wonder if the dual role of judge and "police director" that former judge Johnston mentions in his comment would be considered a violation of due process after Williams v. Pennsylvania, http://lawprofessors.typepad.com/conlaw/2016/06/supreme-court-finds-due-process-violated-when-prosecutor-turned-judge-did-not-recuse.html, or at least a conflict of interest or judicial bias: "In addition to being an elected Circuit Judge for 18 years, in the busiest [or possibly the 2nd busiest circuit (cases per judge)] my additionally responsibility was to be the Director of the 13th Circuit Police, a 30+ person police force which patrolled Mobile Government Plaza, Mobile Community Corrections Center, Strickland Youth Center, and the Bay Haas Building. Additionally, we had a three person warrant team that arrest felons, some very violent, usually at sunrise. I supervised all aspects of this force and took any complaints regard any matter you can imagine."

I have no doubt that the citizens of Alabama's 13th Judicial Circuit are relieved that the Hon. Rusty Johnston is no longer on the bench.

Judge Johnston's inability to accept that black lives indeed do matter confirms that our nation's ugly past has not passed. District Judge Carlton Reeves of Mississippi recently reminded us of the state of black lives in America today. This is what he said from the bench while sentencing three white men for the lynch mob murder of a black man last year:

"Mississippi has a tortured past, and it has struggled mightily to reinvent itself and become a New Mississippi. New generations have attempted to pull Mississippi from the abyss of moral depravity in which it once so proudly floundered in. Despite much progress and the efforts of the new generations, these three defendants are before me today: Deryl Paul Dedmon, Dylan Wade Butler and John Aaron Rice. They and their co-conspirators ripped off the scab of the healing scars of Mississippi ... causing her (our Mississippi) to bleed again.

"Hate comes in all shapes, sizes, colors, and from this case, we know it comes in different sexes and ages. A toxic mix of alcohol, foolishness and unadulterated hatred caused these young people to resurrect the nightmarish specter of lynchings and lynch mobs from the Mississippi we long to forget. Like the marauders of ages past, these young folk conspired, planned, and coordinated a plan of attack on certain neighborhoods in the city of Jackson for the sole purpose of harassing, terrorizing, physically assaulting and causing bodily injury to black folk. They punched and kicked them about their bodies — their heads, their faces. They prowled. They came ready to hurt. They used dangerous weapons; they targeted the weak; they recruited and encouraged others to join in the coordinated chaos; and they boasted about their shameful activity. This was a 2011 version of the n***** hunts."

Judge Joseph S. Johnston (Rusty Johnston) basically concedes that the findings of this paper are valid. However, he justifies the violence against Black people by claiming that Black people deserve it.

Judge Johnston's callous disregard for the value of Black lives, in his way of justification, is quite similar to how Nazis often justify their crimes against humanity. See for example, "Nazi laws were passed against homosexuality only after their own outrageous open street sex-orgy parties and pedophilia behavior was being roundly criticized in the German press, thereby threatening Hitler's support base among heterosexuals. Policies of concealment thereafter prevailed." http://bit.do/ccM63

To use Hannah Arendt's language, the longer I read Judge Johnston's hateful comment, "the more obvious it became that his inability to speak was closely connected with an inability to think, namely to think from the standpoint of somebody else."