A Virginia school board has filed a stay application in the United States Supreme Court pending a petition for writ of certiorari to the Fourth Circuit's opinion in G.G. v. Glouster County School Board.  In G.G., a divided panel, reversing the senior district judge, concluded that Title IX's ban on sex discrimination,  20 U.S.C. § 1681(a), requires schools to provide transgender students access to restrooms congruent with their gender identity. (The senior district judge had not reached the Equal Protection claim, so it was not before the Fourth Circuit.)  In construing Title IX, the Fourth Circuit relied upon a January 7, 2015 opinion letter from the United States Department of Education, Office for Civil Rights, with a similar conclusion.  The Fourth Circuit accorded deference to the agency interpretation of Title IX under Auer v. Robbins (1997), because the relevant regulation was ambiguous - - - perhaps not in the plain meaning, but in its application:

Although the regulation may refer unambiguously to males and females, it is silent as to how a school should determine whether a transgender individual is a male or female for the purpose of access to sex-segregated restrooms. We conclude that the regulation is susceptible to more than one plausible reading because it permits both the Board’s reading— determining maleness or femaleness with reference exclusively to genitalia—and the Department’s interpretation—determining maleness or femaleness with reference to gender identity. [citation omitted].  It is not clear to us how the regulation would apply in a number of situations—even under the Board’s own “biological gender” formulation. For example, which restroom would a transgender individual who had undergone sex-reassignment surgery use? What about an intersex individual? What about an individual born with X-X-Y sex chromosomes? What about an individual who lost external genitalia in an accident? The Department’s interpretation resolves ambiguity by providing that in the case of a transgender individual using a sex-segregated facility, the individual’s sex as male or female is to be generally determined by reference to the student’s gender identity.

The Fourth Circuit panel rejected G.G.'s request to have the case reassigned to another district judge, but did reverse, vacate, and remand the district court's order dismissing the complaint.  The Fourth Circuit panel, in an unpublished opinion on July 12, denied the school board's motion for a stay pending appeal, again with one dissent.

The stay application in the United States Supreme Court pending a petition for writ of certiorari argues that the Fourth Circuit's opinion in an "extreme example" of judicial deference to an administrative agency and is the "perfect vehicle" for the Court's reconsideration of Auer v. Robbins (1997).  The motion notes that several Justices have signaled such a reconsideration might be warranted, notably the late Justice Scalia, as well as Alito and Thomas, and Chief Justice Roberts.  The application also argues that the DOE and DOJ have "seized momentum" and issued further instructions (citing a May 13 DOE  "Dear Colleagues" Letter) which would further solidify Auer deference, making action by the Court necessary.

Meanwhile, thirteen states have filed a complaint and application for preliminary injunction in Texas, based on the same letter:

On May 13, 2016, following years of incremental preambles (“guidances,” “interpretations,” and the like), Defendants informed the nation’s schools that they must immediately allow students to use the bathrooms, locker rooms and showers of the student’s choosing, or risk losing Title IX-linked funding. And employers that refuse to permit employees to utilize the intimate areas of their choice face legal liability under Title VII. These new mandates, putting the federal government in the unprecedented position of policing public school property and facilities, inter alia, run roughshod over clear lines of authority, local policies, and unambiguous federal law.

The central challenge is failure to conform with the Administrative Procedure Act, including notice and comment for rule-making.  However, the complaint also alleges that the federal government defendants "violated the Spending Clause" by engaging in "unconstitutional coercion" by "economic dragooning."  The complaint relies on that portion of the "Obamacare" case, NFIB v. Sebelius, in which a plurality found constitutional issues with the medicaid expansion program.
This portion of the complaint is less than 2 pages (in a 39 page document) and is cursory at best, although perhaps these arguments have the potential to be developed.
In short, it seems issues of gender-identity will be the subject of much litigation, perhaps even at the United States Supreme Court, in the next few years. 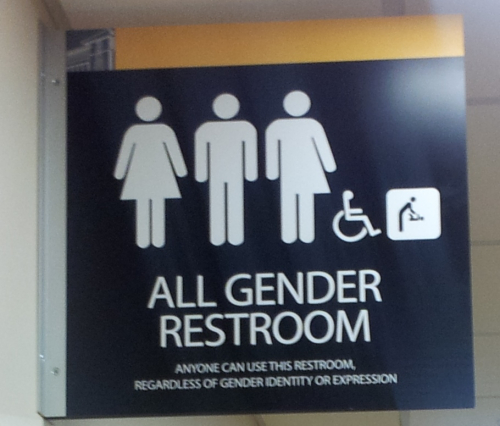