In its highly anticipated opinion in Williams v. Pennsylvania, the United States Supreme Court found that the failure of Chief Justice of the Pennsylvania Supreme Court Ronald Castille to recuse himself in the death penalty review of Williams' postconviction appeal constituted a violation of the Due Process Clause.

Recall that Chief Justice Castille, who retired from the court when he reached the state mandatory retirement age, was elected in 1993, and retained in elections in 2003 and 2013.  Importantly, before his election to the bench, Castille worked in the district attorney's office for over 20 years, including being twice elected to the District Attorney position; he reportedly claimed to have "sent 45 people to death row." One of those people on death row is Terrance Williams, convicted at age 18 and whose story has attracted much interest. Williams claims that it was a violation of due process and the Eighth Amendment for Justice Castille to deny the motion to recuse himself from consideration of Williams' petition for post conviction relief.  Williams contends that Castille, as a prosecutor, was personally involved in the case and the decision to seek the death penalty.  Williams' post-conviction claim, moreover, is based on prosecutorial misconduct.

Writing for the five Justice majority, Justice Kennedy relied on the Court's previous decision in Caperton v. A.T. Massey Coal. Co. in 2009 - - - which Kennedy also authored - - - to articulate the applicable "objective standard" of recusal when the "likelihood of bias on the part of the judge 'is too high to be constitutionally tolerable.'" While Kennedy noted that the "due process precedents do not set forth a specific test governing recusal when, as here, a judge had prior involvement in a case as a prosecutor," the Court articulated a clear rule:

The Court now holds that under the Due Process Clause there is an impermissible risk of actual bias when a judge earlier had significant, personal involvement as a prosecutor in a critical decision regarding the defendant’s case.

This rule, the Court reasoned, is based upon the due process guarantee that “no man can be a judge in his own case,” which would have little substance if it did not disqualify a former prosecutor from sitting in judgment of a prosecution in which he or she had made a critical decision."

As to the passage of time between the prosecutorial and judicial events, the Court reasoned that

A prosecutor may bear responsibility for any number of critical decisions, including what charges to bring, whether to extend a plea bargain, and which witnesses to call. Even if decades intervene before the former prosecutor revisits the matter as a jurist, the case may implicate the effects and continuing force of his or her original decision. In these circumstances, there remains a serious risk that a judge would be influenced by an improper, if inadvertent, motive to validate and preserve the result obtained through the adversary process. The involvement of multiple actors and the passage of time do not relieve the former prosecutor of the duty to withdraw in order to ensure the neutrality of the judicial process in determining the consequences that his or her own earlier, critical decision may have set in motion.

As to the argument that Castille's authorization to seek the death penalty against Williams was insignificant in a large office, the Court specifically found that "characterization cannot be credited." First, the Court stated that it would not assume that the District Attorney treated so major a decision as whether or not to pursue the death penalty as a "perfunctory task requiring little time, judgment, or reflection."  Second, the Court noted that "Chief Justice Castille's own comments while running for judicial office" refute any claim that he believed he did not play a major role in seeking death sentences.  And third, the Court noted that claim and finding that the trial prosecutor had engaged in multiple and intentional Brady violations, it would be difficult for "a judge in his position" not to view this as a "criticism of his former office, and, to some extent, of his own leadership and supervision as district attorney."

As to the argument that Castille did not cast the "deciding vote" - - - unlike the situation in Caperton - - - and so any error was harmless, the Court stressed the role of the court as a unit:

A multimember court must not have its guarantee of neutrality undermined, for the appearance of bias de- means the reputation and integrity not just of one jurist, but of the larger institution of which he or she is a part. An insistence on the appearance of neutrality is not some artificial attempt to mask imperfection in the judicial process, but rather an essential means of ensuring the reality of a fair adjudication. Both the appearance and reality of impartial justice are necessary to the public legitimacy of judicial pronouncements and thus to the rule of law itself. When the objective risk of actual bias on the part of a judge rises to an unconstitutional level, the failure to recuse cannot be deemed harmless.

Chief Justice Roberts, joined by Justice Alito, and Justice Thomas writing separately, dissented - - - not surprising given that they have also dissented in Caperton.  Roberts's opinion draws the line between due process and judicial ethics: just because it was an ethics violation, does not mean it is a due process violation.  Roberts states that it is "up to state authorities" to determine whether recusal is required.

In sum, this extension of Caperton to judicial decisions by former prosecutors and the Court's articulation of a clear rule should result in a new regime of uniform recusal mandated by the Due Process Clause. 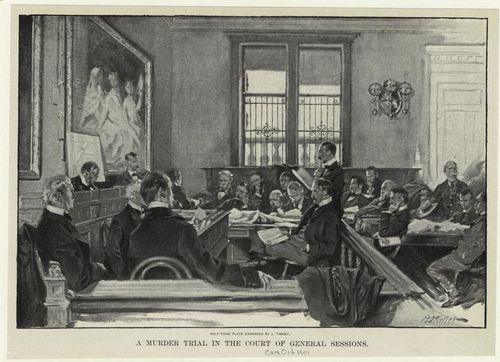 [image NYPL digital collection, "A Murder Trial in the Court of General Sessions, circa 1901, via]