In her extensive opinion in Wandering Dago, Inc.  v. Desito, United States District Judge for the Northern District of New York Judge Mae D'Agostino granted summary judgment for the government against the First Amendment and Equal Protection claims of "Wandering Dago" resulting from the denial of a permit to operate a food truck at the Empire State Plaza in Albany (pictured below), a facility owned by the state of New York and operated by the state Office of General Services (OGS) under Commissioner RoAnn Desito.

In the summers of 2013 and 2014, OGS administered "The Empire State Plaza Summer Outdoor Lunch Program," permitting vendors to operate food trucks for limited hours on the plaza, intended to provide "lunch options to the approximately 11,000 State employees who work at Empire State Plaza, as well as for visitors to the Capitol, State Museum, performing arts center" - - - known as The Egg - - - and various monuments and memorials in New York's capital city.  As the list of applicants was being processed, the name "Wandering Dago" attracted attention of OGS employees, one who "recognized the term 'dago' as 'a highly offensive term for Italians,'" and after conducting a "computer search" to determine whether this was true, his conclusion was not only "confirmed" but it was "revealed" that the term has been "used to refer to people of Spanish and Portuguese descent, as well as Italians."  OGS denied the application "on the grounds that its name contains an offensive ethnic slur and does not fit with OGS' policy of providing family-friendly policy."  Wandering Dago's application the next year was similarly rejected. 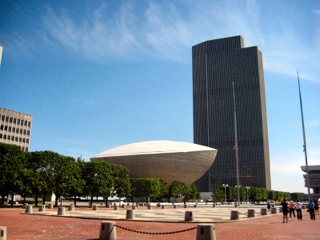 The First Amendment claims were primary; the Equal Protection Clause claims having been previously dismissed and warranting little more analysis when re-plead.  On the First Amendment, Judge D'Agostino identified the problem common to so much free speech litigation: this case does not fit neatly into any particular First Amendment "framework."  Thus, Judge D'Agostino engaged in several strands of analysis, most prominently being "forum" analysis, but also government speech, employee (contractor) speech, and commercial speech.

As to forum doctrine, Judge D'Agostino rehearses the well-know different types of forum, ultimately deciding that the forum is a "nonpublic forum."  Key to this conclusion, as is so often true, is the definition of the forum.  For Judge D'Agostino, the forum is not Empire State Plaza, but the lunch program - - - "which happens to take place within the grounds that comprise the Empire State Plaza."  That OGS required permits and controlled the "forum" contributes to this view.

Yet even under a nonpublic forum, the government must be "reasonable" and content/viewpoint neutral.  As to the reasonableness, Judge D'Agostino discounted the fact that the policy was not written or even previously articulated.  Somewhat confusingly, the judge decided that the owners of Dago did not intend to express anything particular by the name, and therefore there could be no viewpoint/content discrimination and similarly found that there was no problem with unbridled discretion.  The judge rejected the applicability of  In Re Simon Shiao Tam, in which the en banc Federal Circuit held that the disparagement provision in Section 2(a) of the Lanham Act, 15 U.S.C. § 1052(a), barring the the Patent and Trademark Office from registering scandalous, immoral, or disparaging marks, is unconstitutional because it violates the First Amendment because  it did not involve a forum, but an application of strict scrutiny.  Judge D'Agostino also distinguished cases in which the proprietor was denied the entire opportunity to sell the goods rather than simply not allowed to participate in a particular program.

The particular program aspect supports the judge's conclusion that "government speech" was at issue, relying on Walker v. Texas Sons of Confederate Veterans in which the Court found that Texas's program of specialty license plates was government speech.

While Judge D'Agostino's opinion is well-structured and comprehensive, the analysis regarding content/viewpoint discrimination, no matter the forum type, will most likely be fertile ground for appeal.  On government speech, the case may provide the Second Circuit with an opportunity to clarify the limits of Walker.

Ever since it was decided, I cannot help but feel that Walker was wrong. How can a license plate that is designed, selected, purchased and displayed by private individuals be government speech? The Wandering Dago case on the other hand seems to present a different situation.