In a relatively brief opinion in Susan B. Anthony List v. Driehaus, a panel of the Sixth Circuit found that Ohio's false campaign statute, Ohio Rev. Code § 3517.21(B)(9),  violates the First Amendment.

Recall that the Sixth Circuit had previously decided that the constitutional challenge was not ripe for review, but that the United States Supreme Court unanimously reversed in June 2014.  On remand, District Judge Timothy Black concluded that the statute violated the First Amendment. 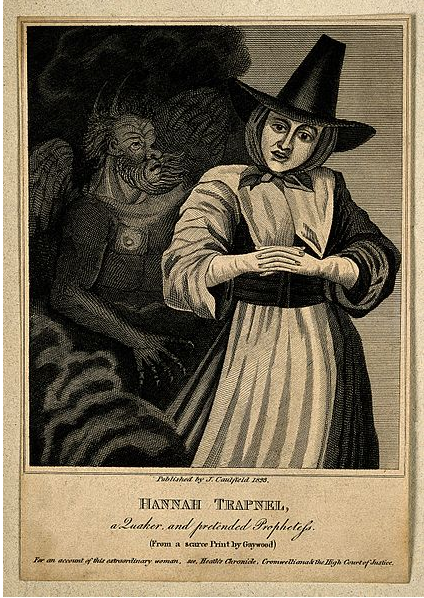 Hannah Trapnel, a Quaker and a pretended prophet. Line engraving after R. Gaywood, 1823, via

The Sixth Circuit panel reasoned that any Sixth Circuit precedent supporting the view that falsehoods were categorically excluded from the First Amendment had been abrogated by United States v. Alvarez,  (the "stolen valor" case).  Instead, the panel found that the Ohio law both targeted core speech and was a content-based regulation, and thus strict scrutiny was applicable.  The Sixth Circuit reasoned that

Ohio’s interests in preserving the integrity of its elections, protecting “voters from confusion and undue influence,” and “ensuring that an individual’s right to vote is not undermined by fraud in the election process” are compelling.

However, the means chosen were not narrowly tailored:

Ohio’s political false-statements laws have similar features to another Ohio election law that the Supreme Court found unconstitutional. In McIntyre [v. Ohio Elections Committee (1995)] , the Supreme Court struck down Ohio’s election law prohibiting anonymous leafleting because its prohibitions included non-material statements that were “not even arguably false or misleading,” made by candidates, campaign supporters, and “individuals acting independently and using only their own modest resources,” whether made “on the eve of an election, when the opportunity for reply is limited,” or months in advance. Ohio’s political false-statements laws have all of the same flaws. Such glaring oversteps are not narrowly tailored to preserve fair elections.

The use of McIntyre is an interesting one because the "right to be anonymous" recognized in McIntyre seemed to rest in part on the government interest in ensuring truthfulness and cited the Ohio campaign falsehoods law in support.

Given that the court did recognize as compelling the government's interests in addressing lies in campaigns, is there any possibility that a government could craft a narrowly tailored regulation?  It seems doubtful.