Justice Souter - - - retired from the United States Supreme Court but sitting by designation on a First Circuit panel - - - declined to extend the Court's decision in Harris v. Quinn to the context of home child care workers in the opinion in D'Agostino v. Baker. 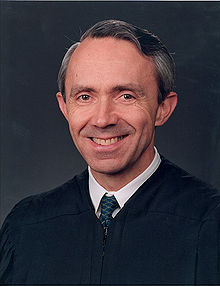 At issue was Massachusetts Gen. Laws ch. 15D, § 17(b), providing that family child care providers "shall be considered public employees . . . solely for the purposes of . . . chapter 150E," the statute authorizing employees in public service to organize for collective bargaining. The majority of the family child care providers chose Service Employees International Union (SEIU) as their exclusive agent for bargaining collectively with the state.  And while the statute did not mandate that any child care provider join the union or contribute any money to the union, the plaintiffs challenged the statute as violating their First Amendment rights, especially free association.

Writing for the unanimous panel, Souter opined that the "disposition of the constitutional claims turns on precedent, and the appellants' principal arguments probe the vitality of that precedent in light of recent developments."  For Souter, the precedents of Abood v. Detroit Board of Education (1977)  and Minnesota State Board for Community Colleges v. Knight (1984) remain controlling, despite Harris v. Quinn:

But the Harris distinction does not decide this case. While we can agree with the appellants in assuming the comparability of Harris's personal assistants and the child care providers here, the issues at stake in the two cases are different. Unlike the Harris litigants, the appellants are not challenging a mandatory fee; indeed, an agency fee previously enforced against the providers here was eliminated after Harris came down. What Harris did not speak to, however, was the premise assumed and extended in Knight: that exclusive bargaining representation by a democratically selected union does not, without more, violate the right of free association on the part of dissenting non-union members of the bargaining unit. Harris did not hold or say that this rule was inapplicable to "partial" employees covered by a collective bargaining agreement. Harris, in fact, did not so much as mention Knight, and precedent supports applying its rule here.

Souter was not on the Court when it decided Abood, Knight, or Harris.  And of course he is not on the Court as it deliberates Friedrichs v. California Teachers Ass'n, which may be the "demise" of public fair share union dues and the rejection of the  precedent on which Souter is relying here.