In her opinion in Jones v. County of Suffolk (NY) and Parents For Megan's Law, Judge Joanna Seybert found that the group was a state actor for constitutional purposes and that the complaint stated a valid Fourth Amendment claim.

The facts as alleged in the complaint illustrate the continuing constitutional issues with civil monitoring of persons convicted of sex offenses.  Jones, convicted in 1992, is a low-risk sex offender subject to numerous requirements under the New York Sex Offender Registry Act (SORA).  New York's Suffolk County (on Long Island), passed an additional act, the Community Protection Act, which Judge Seybert described as including "aggressive sex offender monitoring and verification."  The county act authorized the county law enforcement agency to enter into a contract with the organization Parents for Megan's Law (PFML), a “victim’s advocacy organization that campaigns for increased punitive regulation of people registered for past sex offenses” and “has called for legislative changes that, among other things, would require people convicted of SORA offenses to live far away from population centers.”  The contract requires PML to "use ex-law enforcement personnel" to "engage in proactive monitoring of registered sex offenders."  And "proactive" would be one way to describe the actions of the PFML personnel who came to Jones' home several times, waited for him at the doorstep, asked for his driver's license and kept it for several minutes,  questioned him about his employment, and warned that they would make further unannounced visits to his home and work. 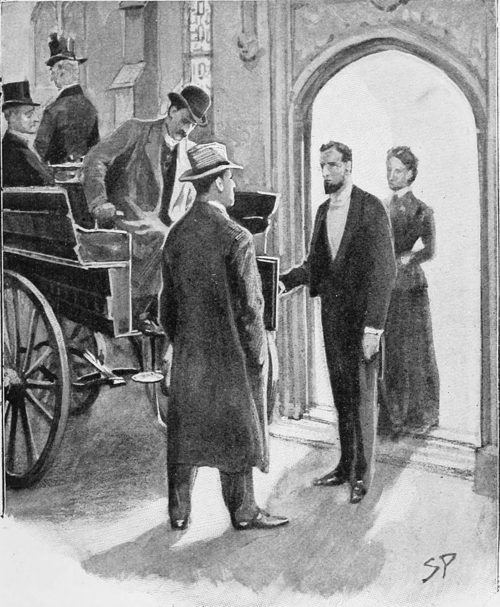 Illustration from Hound of the Baskervilles via

In its motion to dismiss, PFML argued that it was a private entity not subject to constitutional constraints.  Judge Seybert, relying on Second Circuit precedent, held that there was a "close nexus" and a "delegation of a public function," and thus PML was a state actor.  This was not an ordinary contract, but one in which the police department directed the monitoring operations of the PFML.  Important to her analysis, there was a letter from the county police department informing designated  sex offenders that they would be required to provide identification to PML personnel, thus "creating the appearance of joint action" between the state and the organization.

The letter was also important to Judge Seybert's Fourth Amendment analysis.  The judge distinguished the allegations here from Florida v. Jardines (2013), on which both parties relied, regarding the constitutionality of a so-called "knock and talk" by law enforcement:

Defendants assert that because PFML agents’ interactions with Jones can be classified as a “knock and talk,” no Fourth Amendment violation occurred. However, the allegations in the Complaint raise questions about whether a reasonable person in Jones’ position would feel free to terminate his interactions with PFML. The questioning here did not take place in an open field, or a Greyhound bus, but rather within Jones curtilage--an area afforded heightened Fourth Amendment protection. Moreover, in advance of the visits, Jones received a letter from the SCPD instructing him that he would be visited by PFML for the purpose of verifying his address and employment information. Although the letter stated that Jones would be “asked to provide them with personal identification” and “requested to provide employment information,” the letter begins by stating that “registered sex offenders are required to provide this information under [SORA].” Citizens do not often receive letters from the police announcing home visits by third-party groups. At the very least, the letter is ambiguous as to whether compliance was mandatory. Finally, the description of PFML agents’ conduct gives the distinct impression that compliance was not optional. The fact that the agents waited for fifteen minutes on Jones’ porch while he was in the shower, “followed [him] closely” as he walked to retrieve his driver’s license, and told Jones that “they may make subsequent, unannounced appearances at his job,” gives the encounter the appearance of a seizure of Jones’ person, rather than a consensual “knock and talk.”

Judge Seybert did dismiss the complaint's due process claim, which Jones argued were based on a right to familial association that had been injured by the PFML "visits" to his home.  Judge Seybert reasoned that there was no "invasion of a liberty interest" that was "separate and apart" from the Fourth Amendment claim and thus an independent substantive due process claim could not proceed.