The Kansas Court of Appeals, the intermediate appellate court, has found that the Kansas Constitution includes a due process right applicable to abortion and that the Kansas Unborn Child Protection from Dismemberment Abortion Act (SB95) violates that right in its opinion by Judge Steve Leben in Hodes & Nauser v. Schmidt.

Before the discussion of the constitutionality of the Act, there were some preliminary - - - and unusual - - - issues, including some noteworthy matters of procedure. Unusually, the Court of Appeals heard the case en banc rather in a panel of three.  And presumably also unusual, the judges were "equally divided, seven voting to affirm the district court and seven voting to reverse."  Thus, the trial court's ruling granting a preliminary injunction against the Act was affirmed. 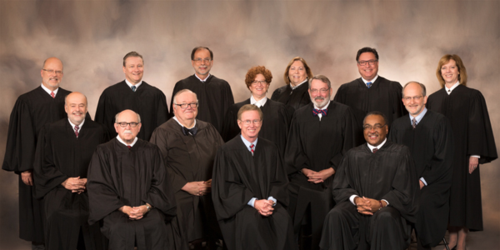 Judges of the Kansas Court of Appeals via

Additionally, there were some state constitutional law issues.  Importantly, the plaintiffs' argument that the Act is unconstitutional rests solely on the state constitution.  As the Leben opinion stated, this was a case of first impression and a  "plaintiff has the procedural right to choose the legal theories he or she will pursue; we cannot force the plaintiffs here to choose another legal avenue.")  But the Kansas State Constitution does not include a due process clause - - - or even the words "due process" - - - unlike the United States Constitution's Fifth and Fourteenth Amendments, in which the right to an abortion has been anchored.  Instead, plaintiffs argued, and the court found, that §1 and §2 of the Kansas Constitution Bill of Rights include a due process right despite their explicit language:

§ 1. Equal rights. All men are possessed of equal and inalienable natural rights, among which are life, liberty, and the pursuit of happiness.

§ 2. Political power; privileges. All political power is inherent in the people, and all free governments are founded on their authority, and are instituted for their equal protection and benefit. No special privileges or immunities shall ever be granted by the legislature, which may not be altered, revoked or repealed by the same body; and this power shall be exercised by no other tribunal or agency.

The rights of Kansas women in 2016 are not limited to those specifically intended by the men who drafted our state's constitution in 1859.

Under the co-extensive interpretation, Judge Leben's opinion thus confronted the constitutionality of the Kansas Act under the substantive due process "undue burden" standard.  This entailed an application of the disparate Carhart cases: Stenberg v. Carhart (2000) and Gonzales v. Carhart (2007).  In Stenberg, the Court concluded Nebraska's so-called "partial-birth abortion" statute was unconstitutional; in Gonzales, the Court concluded that the federal so-called "partial-birth abortion" statute was constitutional.

Interestingly, Judge Atcheson's concurring opinion responded to the Justice Kennedy's language in Gonzales and the language of the Kansas Act:

The State's remaining argument rests on the unaesthetic description of a D &E abortion contained in Senate Bill 95 and in Gonzales v. Carhart (2007). But aesthetics really cannot justify legislative limitations on safe medical procedures. The lack of justification is even more pronounced when the procedure is integral to a woman's constitutional right to self-determination and reproductive freedom. The government cannot impose upon an essential right because some exercise of the right may be unaesthetic or even repulsive to some people. That's all the more true when those people needn't see or participate in the protected activity.

The dissenting opinion concludes that there is "nothing in the text or history of §§1 and 2 of the Kansas Constitution Bill of Rights to lead this court to conclude that these provisions were intended to guarantee a right to abortion."

This matter is surely going to the Kansas Supreme Court, as Judge Leben's opinion for the Kansas Court of Appeals acknowledged.  Rendered on the 43rd anniversary of the United States Supreme Court's decision in Roe v. Wade and as the Court prepares to consider its first abortion case in 8 years, Whole Woman's Health v. Cole, the Kansas Court of Appeals evenly split decision exemplifies how divided opinion on this issue can be.

Can you tell me what states have language in their constitutions that says there is no right to abortion? For example, my state, Rhode Island, says it clearly in Article 1, Section 2 (equal protection and due process clauses). Very concerning that it has the language, as it means we cant win lawsuits like the Kansas suit or the 13 states that used the courts to gain Medicaid coverage for abortion.