In its more than 100 page opinion today in In Re Simon Shiao Tam, the en banc Federal Circuit held that the disparagement provision in Section 2(a) of the Lanham Act, 15 U.S.C. § 1052(a), barring the the Patent and Trademark Office from registering scandalous, immoral, or disparaging marks, is unconstitutional because it violates the First Amendment.

The central issue was the denial of a trademark registration to "The Slants" by the applicant Simon Shiao Tam, on behalf of the Portland, Oregon "all Asian American dance rock band" (pictured below). 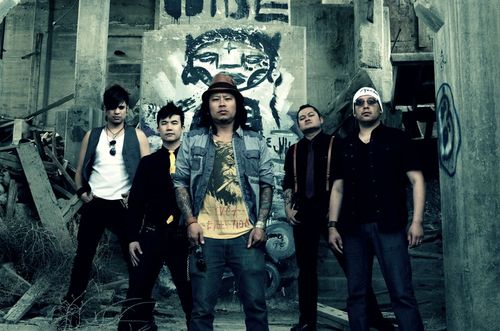 The Circuit sua sponte ordered rehearing en banc.  The majority opinion, authored by Judge Kimberly Moore (who was formerly a law prof at George Mason School of Law), was joined by 8 other judges, including Chief Judge Sharon Prost, reasoned that much had changed since the 1981 circuit precedent - - - including the jurisprudence offering protections for commercial speech under the First Amendment - - - and that the First Amendment should apply.

Not only should the First Amendment apply, it is violated in the most egregious manner: viewpoint discrimination. Moore's opinion for the majority stresses that the "disparagement" provision "discriminates against speech because it disapproves of the message conveyed by the speech" and is therefore subject to strict scrutiny.  That the government might itself not disapprove but "claims that some part of the populace will disapprove of the message" is irrelevant.  When the PTO refuses to register a trademark under this provision,"it does so because it believes the mark conveys an expressive message—a message that is disparaging to certain groups."  Mr. Tam was undoubtedly engaging in expressive speech:

Mr. Tam explicitly selected his mark to create a dialogue on controversial political and social issues. With his band name, Mr. Tam makes a statement about racial and ethnic identity. He seeks to shift the meaning of, and thereby reclaim, an emotionally charged word. He advocates for social change and challenges perceptions of people of Asian descent. His band name pushes people. It offends. Despite this—indeed, because of it—Mr. Tam’s band name is expressive speech.

The court rejected the government's three arguments, including its argument that the First Amendment did not apply since no speech was prohibited.  The government's second argument - - - that trademark registration is government speech - - - was likewise rejected.  Here, the court distinguished last Term's decision in Walker v. Texas Sons of Confederate Veterans, the confederate flag license plate case, by distinguishing between the license plate (which the government continues to own and which the car driver must affix) and the trademark symbol (which the government does not "own" and the registrant can use or not).  As for public perception, the court used a copyright analogy: just as the public does not associate copyrighted works such as Fifty Shades of Grey with the government, "neither does the public associate individual trademarks such as THE SLANTS with the government."

The court likewise rejected the government argument that § 2(a) merely withholds a government subsidy for Mr. Tam’s speech and is valid as a permissible definition of a government subsidy program: "Trademark registration does not implicate Congress’s power to spend or to control use of government property."  Further, the "benefits of trademark registration, while valuable, are not monetary, and are "unlike a subsidy consisting of, for example, HIV/AIDS funding," as in the Court's 2013 decision in USAID v. Alliance for an Open Society.

The majority's opinion clearly rests on its conclusion that the disparagement provision of § 2(a) is viewpoint discrimination that cannot survive strict scrutiny.  But it also provides the fall-back rationale of commercial speech.

Even if we were to treat § 2(a) as a regulation of commercial speech, it would fail to survive. In Central Hudson, the Supreme Court laid out the intermediate- scrutiny framework for determining the constitutionality of restrictions on commercial speech.  First, commercial speech “must concern lawful activity and not be misleading.”  If this is the case, we ask whether “the asserted governmental interest is substantial,” id., and whether the regulation “directly and materially advanc[es]” the government’s asserted interest and is narrowly tailored to achieve that objective.

[citations omitted].  But the court's rationale circles back.  The court finds that 2(a) fails at the second step: the government interest cannot be substantial because it is based on viewpoint discrimination.  This is certainly predictable in light of IMS v. Sorrell (2011).  The court finds that the government's asserted interest in "fostering racial tolerance" cannot support a speech regulation. "The case law does not recognize a substantial interest in discriminatorily regulating private speech to try to reduce racial intolerance."  The cases relied upon are outside the commercial speech realm.

As the court notes numerous times throughout its opinions, the disparagement provision has long been contentious, including the notorious "Dykes on Bikes" trademark dispute (which I wrote about here).

But currently - - - and looming largely - - - the ongoing litigation currently before the Fourth Circuit regarding the PTO's cancellation of the trademark of a football team with the name many believe disparages Native Americans.

Moreover, given that a circuit court has declared a portion of a federal statute unconstitutional, this issue could well be going to the United States Supreme Court.