This deep divide was apparent, despite the fact that Fisher I was a 7-1 opinion as Justice Breyer noted today.  (Only Justice Ginsburg dissented in Fisher I; Justice Kagan was recused).  Breyer stated that the Court "promised in Fisher I" that strict scrutiny would not be "fatal in fact" as applied in university affirmative action.  Justice Breyer had previously stressed in a colloquy with Bert Rein, representing Fisher, that it must be possible to use race, actually "spelling it out" to counsel.  After Breyer asked for an example of using race and Rein replied "you could give more emphasis to socio-economic factors," Breyer stated:

That's not to use race. I'm saying r­-a­-c­-e, race. I want to know which are the things they could do that, in your view, would be okay. Because I'm really trying to find out. Not fatal in fact, we've said. Okay? Not fatal in fact. Fine.

Yet the problem of the requirement of narrowly tailored proved difficult.  Perhaps Solicitor General Verrilli, supporting the University of Texas, expressed the problem best by calling it a "Catch-22."  Indeed, it seemed that the university's plan was problematic both because it was and was not effective. Nevertheless, one recurring argument was whether the University of Texas plan was as good as - - - if not better - - - than the plans upheld in Grutter and Bakke.

The arguments were not limited to the means chosen, however, for the continued validity of diversity as a compelling interest in higher education surfaced repeatedly.  While General Verrilli did not mention George Washington, he did aver to the continued importance of diversity in higher education and for the nation.  Moreover, there were references to the hope expressed by the Court in Grutter v. University of Michigan that affirmative action would not be necessary in 25 years.  Chief Justice Roberts asked counsel for University of Texas, Gregory Garre, whether we were going to "hit the deadline" in 12 more years.  Justice Scalia asked Solicitor General Verrilli if he thought we could "stop disadvantaging some applicants because of their race" in another 13 years.

Scalia made it clear that he thought the time for any type of racial affirmative action was long past, if there ever was such a time.  Indeed, in what was probably the most controversial commentary in the argument, Scalia advanced what might be called a separate-but-unequal argument:

There are ­­ there are those who contend that it does not benefit African­-Americans to ­­ to get them into the University of Texas where they do not do well, as opposed to having them go to a less­ advanced school, a less ­­ a slower ­track school where they do well. One of ­­ one of the briefs pointed out that ­­ that most of the ­­ most of the black scientists in this country don't come from schools like the University of Texas.

. . . . They come from lesser schools where they do not feel that they're ­­ that they're being pushed ahead in ­­ in classes that are too ­­ too fast for them.

Will it all devolve to Justice Kennedy? 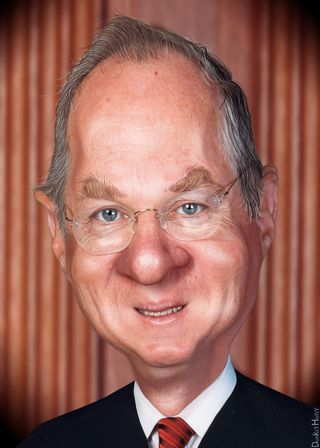 If Justice Kennedy, the author of Fisher I,  is the "swing vote" in Fisher II, it may be that the Court would remand Fisher to the district court for a trial.

Recall that the Fifth Circuit in Fisher on remand from the United States Supreme Court did not remand to the district court, but decided the case.  But just what that evidence might possibly be adduced at a trial was also a controversial subject at the oral argument.

Still, this might be the only compromise available for such a divided Court.