In an opinion denying a motion to dismiss in Love v. Johnson, United States District Judge for the Eastern District of Michigan Nancy Edmunds has concluded there is a fundamental privacy right in one's transgender status under the Fourteenth Amendment's Due Process Clause.  The constitutional challenge is to Michigan's policy for changing the sex designation on state-issued identification, including drivers licenses.  Under the policy, the only document that is accepted as a proof of sex designation is a certified birth certificate.   Thus, transgendered individuals would need an amended certified birth certificate - - - for which the procurement process is described as "onerous" - - - and could not use passports, which are specifically excluded by the Michigan policy. 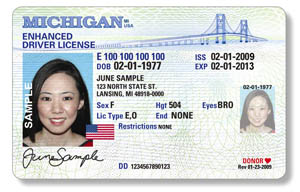 In finding a fundamental right, the judge considered Sixth Circuit precedent that there were two types of fundamental rights protected “by the right to privacy that is rooted in substantive due process”:  the interest in “independence in making certain kinds of important decisions,” and the “interest in avoiding disclosure of personal matters.”  The court found that the latter - - - the "informational privacy" interest - - - was implicated.  This right must not only relate to a "fundamental liberty interest" but must satisfy either of two conditions: "the release of personal information could lead to bodily harm" or "the information released was of a sexual, personal, and humiliating nature."  The judge found that both 'the potential for harm' and 'the personal nature' conditions were satisfied.  The judge rejected the State's argument that the plaintiffs had not satisfied the harm prong because they had not shown sufficiently specific danger to themselves; it recognized "hostility and intolerance" and cited supporting Second Circuit caselaw.

The judge then applied strict scrutiny, writing that when

state action infringes upon a fundamental right, “such action will be upheld under the substantive due process component of the Fourteenth Amendment only where the governmental action furthers a compelling state interest, and is narrowly drawn to further that state interest.”  Defendant vaguely identifies two purported interests–albeit not in the context of a fundamental right–in support of the Policy: (1) “maintaining accurate state identification documents” to “promote effective law enforcement” and, (2) ensuring “that the information on the license is consistent with other state records describing the individual.”

[citations and footnote omitted].   The judge found that the means chosen - - - the restrictive policy - - - bears "little, if any, connection" to the "purported interests."  The judge considered two facts especially salient.  First, the Michigan policy applied only to those wishing to change the sex designation on a drivers license, not to procure an original drivers license (in which case a passport would be acceptable identification).  Second,  Michigan's policy was especially restrictive: the majority of other states, as well as the federal government, did not require a certified birth certificate and thus the judge stated she was "unable to conclude at this juncture that the Policy narrowly serves the state’s interest in maintaining “accurate” identification documents or promoting effective law enforcement."

While the complaint raised other constitutional claims, including an equal protection claim, the judge found the motion to dismiss need not be considered as to those claims given the conclusion that there is a valid substantive due process claim which will move forward.

This case, like the recent Supreme Court marriage case, is interesting because it invokes the language of privacy (that hard-to-pin-down penumbral right) to protect what is essentially a matter of public recognition rather than quintessentially private activity. I support the outcome of Obergefell v. Hodges, and I support the outcome here, but I would have preferred that Justice Kennedy clarify his reasoning using accepted Due Process or Equal Protection standards, and the lack of clarity there may be one reason why courts are stretching “privacy” ever further in LGBT rights cases. Had Kennedy been willing to finally designate homosexuals as a protected classification (which I believe is warranted, given the vast history of discrimination in that area) or had he accepted the invitation by at least one amicus brief to treat marriage restrictions as a gender-based classification subject to intermediate scrutiny, the result might at least have fit better with existing jurisprudence. Even a pure animus theory would at least have been more consistent.

In general, I tend to think that decisions based on the privacy right alone are vulnerable to attack as being mere impositions of judicial bias, given that privacy is such a flexible concept subject to narrow or expansive interpretation. Personally, I would have preferred, for example, that Roe v. Wade be decided on the basis of the 13th Amendment prohibition of involuntary servitude (the servitude of the body itself to a dependent organism), and the general refusal of the law, in torts and other areas, to impose intensive affirmative obligations on people for the support of others. Child support is one exception (but financial support is very different from physical subjugation) and the tort requirement to address harms caused, even innocently, by one’s own conduct is another (but I’ve never seen that obligation extended to the level of a 9-month mandatory feeding out of the obligor’s own body). Rose of Sharon’s conduct at the end of Grapes of Wrath, while admirable, should never be a mandatory legal requirement, and neither should the completion of pregnancy.

In this case, evaluation of the ID requirements with regards to transgender individuals might best be handled under Equal Protection analysis, looking into whether enforcement justifications are significant enough to warrant the restrictions given the possibility that such restrictions arise out of a historical animosity towards gender transitions.