Considering a complaint regarding an arrest during the 2011 Occupy Wall Street protests, United States District Judge Jed Rakoff has allowed the Equal Protection Clause claim to proceed in his opinion  in Adkins v. City of New York.

The judge based his opinion on the Second Circuit's 2012 decision in United States v. Windsor (affirmed on other grounds by the United States Supreme Court):

[The Second Circuit in] Windsor held that gay people were a quasi-suspect class on the basis of four factors: gay people have suffered a history of persecution; sexual orientation has no relation to ability to contribute to society; gay people are a discernible group; and gay people remain politically weakened. While transgender people and gay people are not identical, they are similarly situated with respect to each of Windsor’s four factors. 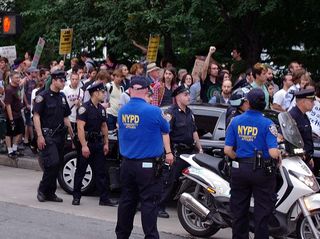 Fourth, transgender people are a politically powerless minority. “The question is whether they have the strength to politically protect themselves from wrongful discrimination.” Windsor, 699 F.3d at 184. Particularly in comparison to gay people at the time of Windsor, transgender people lack the political strength to protect themselves. For example, transgender people cannot serve openly in the military, see Department of Defense Instruction 6130.03 at 48 (incorporating changes as of September 13, 2011), as gay people could when Windsor was decided. See Don’t Ask, Don’t Tell Repeal Act of 2010, Pub.L. No. 111–321, 124 Stat. 3515. Moreover, like gay people, it is difficult to assess the degree of underrepresentation of transgender people in positions of authority without knowing their number relative to the cisgender population. However, in at least one way this underrepresentation inquiry is easier with respect to transgender people: for, although there are and were gay members of the United States Congress (since Windsor, in both houses), as well as gay federal judges, there is no indication that there have ever been any transgender members of the United States Congress or the federal judiciary.

In applying intermediate scrutiny, the judge rejected the government's argument that there was an important safety interest by concluding that there were no actual safety concerns according to the allegations of the complaint (taken as true in the procedural posture of the motion to dismiss).  Judge Rakoff continued:

Moreover, defendants cannot argue their actions were substantially related to ensuring plaintiff’s safety when they removed him from an allegedly safe place and caused him injury, albeit minimal injury, by handcuffing him to a wall next to the sole bathroom in the precinct.

The judge found that the individual defendants were entitled to qualified immunity, especially given that the Second Circuit's decision in Windsor occurred after the October 2011 Occupy Wall Street protest.  However, the judge found that the City of New York could be held liable under a specific pattern on conduct in the unequal treatment of transgender persons.

Thus, the case moves to settlement as so many of the Occupy arrest cases have done - - - unless New York City chooses to appeal the decision that transgendered individuals merit intermediate scrutiny under the Fourteenth Amendment's Equal Protection Clause.

I’m not sure the Carolene Products definition remains the best way to assess Equal Protection classification. Interestingly, both of the current groups subject to intermediate scrutiny do not fit the profile of “discrete and insular” minorities. Women, and illegitimate children, are not discrete or insular; rather, they exist in communities and families across the nation. A more appropriate analysis might focus exclusively on the overall history of discrimination by the body politic, a focus which would, appropriately, be flexible enough to accommodate changing norms. I would say that, under that standard (as well as the discrete and insular test) transgender people are much better current candidates for intermediate scrutiny than, at least, illegitimate children, given modern cultural trends. The thing about the “discrete and insular” evaluation is that, for many purposes, discrete and insular minorities are more likely to be organized, and are thus better able to leverage interest group politics to obtain protection, than are other oppressed groups.

Another question is whether the Equal Protection standard should be variable depending on the type of discrimination alleged. For example, one overall type of discrimination occurs at the policy level, where legislation is developed; another occurs at the executive, administrative or enforcement level, see Yick Wo v. Hopkins. While discrete and insular minorities may be better able to achieve protection at the legislative level, through leveraging their organizational capabilities, diffuse groups such as women, with whom most citizens are well-acquainted and thus comfortable, may be better protected from individualized discrimination in certain contexts, such as discrimination by police officers (though that is debatable). The case at issue here appears to involve a wrongful arrest, discrimination occurring at the enforcement level, and thus minorities such as transgender people may be especially in need of judicial protection, given the clear history of prejudice and violence directed at that group.